Atheist Geek News » Announcements » The End Is Nigh! Again. Thanks, Mayans!

The End Is Nigh! Again. Thanks, Mayans! 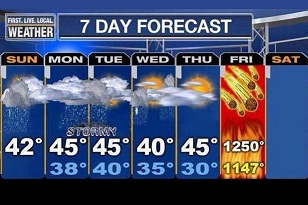 The Watchtower Society takes over your local news station. Only their predictions will be even less accurate than your old weatherman’s. I guarantee it.

Here’s a shocker: we’re all going to die. Again. Of course, we can be rest assured that it won’t be due to a global flood. The Watchtower Society says that Jehovah God won’t do that to us again. (Whew.) So it’ll probably just be due to rocks falling out of the sky or a fast acting – but deadly – strain of dandruff.

On that note, here are some links about how doomed we all are. Time to make with the fucking, kids. Grab somebody who’s doable and get busy.

End of the world – apocalypse live

Mayan apocalypse: Cheer up pal, it’s not the end of the world – the best ‘Doomsday’ virals

Weirdest Syncretism Ever: The Jedi/Mayan Apocalypse

Seriously, the world isn’t going to end like that.

It’ll be because the aliens are coming to get us. Or the dandruff thing.

Have a nice day.

The Atheist Geek is a former Jehovah's Witness turned secular humanist. He's a lifelong sci-fi geek and a writer wannabe.
View all posts by The Atheist Geek →
Tagged Armageddon, end of the world, Mayans. Bookmark the permalink.