In the interest of fairness, I should point out that there are cases where Jehovah’s Witnesses are given special permission to write to – or even talk to (gasp!) a disfellowshipped person. These are usually special cases where an exception has been granted by local elders just once and only once due to extreme circumstances.

There are also stories – legends, almost – of congregations so liberal that they allow Witnesses to have some level of regular contact with disfellowshipped relatives on condition that religion is not a topic of discussion. I have never seen this happen with my own eyes, but like a factually accurate edition of the Watchtower magazine or a well-informed creationist, such stories could be true in theory.

Even so, the Society’s literature makes it very clear that it does not approve of any meaningful contact between its loyal Witnesses and disfellowshipped individuals for any reason. Period. So these are, at best, rare exceptions to the rule.

Unless you ask the Watchtower Society or many of its Witnesses, that is. Yep. Many of them deny shunning entirely to non-Witnesses. (That means dirty old “worldly people” like you.) The Society has also denied it to the media.

I had to put this in because it’s something you’ll hear from time to time. It’s also complete horse doo-doo.

The Watchtower Society – the corporation behind the teachings of Jehovah’s Witnesses – has publicly denied telling its Witnesses to shun the disfellowshipped on more than one occasion. One example comes from the The Independent:

Rick Fenton, a spokesperson for the Watchtower Society, insisted last night that ostracisation was “a personal matter for each individual to decide for himself”. “Any one of Jehovah’s Witnesses is free to express their feelings and to ask questions,” he said. “If a person changes their mind about Bible-based teachings they once held dear, we recognize their right to leave.”

I need to point out something here. When it comes to its more controversial practices, the Watchtower Society has a knack for obfuscating the details. 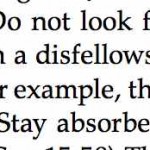 For instance, it is technically true that a person can change his mind about the Society’s “Bible-based teachings,” which he “once held dear.” (I love how Rick phrased that line, BTW. Way to rub it in.) It’s not like they can chain you to the Kingdom Hall parking lot or cement you to one of those god-awful chairs they force you to sit in during the meetings. After all, there are laws against that sort of thing in most countries and the screams would be a bit difficult to ignore for the first few weeks.

But to leave the Society means losing your friends, your family, your home, and – in some cases – even your livelihood. So while it is technically true that Jehovah’s Witnesses are physically capable of choosing to leave the faith as the Society suggests, for many of them, it simply isn’t a real choice at all. 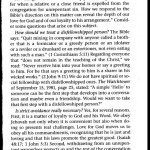 Another infamous example of one of the Society’s representatives denying the practice of shunning to the public – in court, no less – can be found right here in glorious video. The overseer featured in the video starts out by hemming and hawing over the meaning of the word “shunning.” It takes a while for him to finally deny that this is what Jehovah’s Witnesses are told to do. But deny it he does. Too bad the judge in this case wasn’t willing to let the opposing attorney’s ask more questions.

If there’s nothing wrong with the practice of shunning, then all of this denial seems pretty weird to me. Wouldn’t it be better – and more honest – to simply admit it and explain why it’s done?

Why Do They Deny Shunning?

There are several likely reasons. The fact that the Society has been sued more than once over the practice of shunning is probably one of them. It isn’t illegal to shun for religious reasons in the U.S. AFAIK, but defending itself in court still takes a lot of the Society’s money. And local laws may allow some wriggle room, too.

Here’s another reason to think about: the Society isn’t just an American religion. It can be found in many countries, and some of them aren’t so tolerant of shunning in the legal sense. Maybe this, combined with a desire to avoid the whole creepy-cult-like-vibe that could weird-out potential converts, has something to do with it too.

What’s even stranger is the fact that, despite its denials, the Society talks about shunning a lot in its literature. Even the Society’s website acknowledges that shunning happens, although the Society goes about this in its usual no-we-don’t but yes-we-really-do style of explanation.1

Those who were baptized as Jehovah’s Witnesses but no longer preach to others, perhaps even drifting away from association with fellow believers, are not shunned. In fact, we reach out to them and try to rekindle their spiritual interest.

Oh, I guess I was wrong. They don’t shun after all. Or so this quote might lead us to believe. Maybe I was high during that chapter of the Live Forever Book … or was I?

If, however, a baptized Witness makes a practice of breaking the Bible’s moral code and does not repent, he or she will be shunned or disfellowshipped. The Bible clearly states: Remove the wicked man from among yourselves.—1 Corinthians 5:13.

So which is it, guys?

Please note that the Society’s literature is full of contradictions like these, especially literature that’s open for easy public consumption. Somehow, most Jehovah’s Witnesses always know which lines count and which lines don’t.

Also note that what the Society sees as a violation of the Bible’s moral code may not jive with yours and mine, but I’ll get to that in a minute.

Here’s another quote that is technically true but also leaves out certain details that you and I would probably deem important.

Well, that’s true. What the article doesn’t mention is that no one will speak to him, that he will have to sit alone, that he will have to scamper off with his head held low right after the prayer, or that anyone who does speak to him can be disfellowshipped too. If he tries to talk to anyone, he will be asked to leave. If he makes a fuss, the cops will be there to drag him away.

But hey, none of that’s important, right? (Yes it is.) It’s not like that detail completely alters the impression made on anyone who reads the article, right? (Yes it does.)

More recently, on page 16 of the January 2013 edition of the Watchtower, under the article entitled “Let Nothing Distance You From Jehovah,” it tells Jehovah’s Witnesses the following:

Really, what your beloved family member needs to see is your resolute stance to put Jehovah above everything else – including the family bond… Do not look for excuses to associate with a disfellowshipped family member, for example, through e-mail. (1 Cor. 5:11).

The Spanish language version even mentions other forms of communication, like texting. 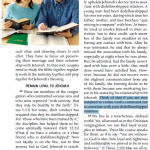 Here’s an example of the Society encouraging Witnesses to shun.

There are degrees of shunning. For instance, I was never officially disfellowshipped by my old Kingdom Hall. Yet many Jehovah’s Witnesses refuse to talk to me anyway. I’ve literally had some of them approach my wife to talk to her about her meeting attendance or to offer her the latest magazines (to remind her that she isn’t living up to their expectations) while completely ignoring me as if I wasn’t there.

They have done this while literally standing three inches away from me. While I was talking to them. Waving my arms. Jumping up and down. Offering to shake their hand. And getting nothing – not even an acknowledgement of my existence – in return.

As a former Witness, I am a very bad associate. That’s pretty much a done deal. So many Jehovah’s Witnesses will shun me even though I was never officially disfellowshipped. And that’s without any of them knowing that I have written vile, apostate articles like this one. If they did, I would be disfellowshipped for it! It would pretty much be an open and shut case.

Some people honestly don’t see what the big deal is. For many Witnesses, disfellowshipping is a devastating loss of family, friends, even livelihoods. Some Witnesses commit suicide after being disfellowshipped, too. I personally know of one case where a disfellowshipped Witness finally committed suicide after years of separation from his wife and children. His death had a big impact on many in the ex-Witness community. As you can imagine, developments like this don’t make the Society look very good, either.

What Can Get Jehovah’s Witnesses Disfellowshipped?

Only the most horrible of crimes! Like putting up a Christmas tree. Smoking. Openly disagreeing with the Society’s teachings. Expressing a lack of faith in the Society’s leaders or in Jehovah God. Accepting a life saving blood transfusion. Celebrating someone’s birthday. Premarital sex… 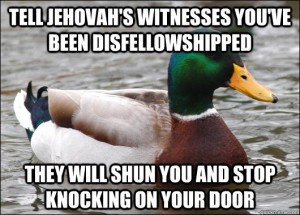 At least there’s one upside.

In the end, Jehovah’s Witnesses do shun and they do it because the Watchtower Society tells them to. Many will deny it unless you ask the question in the right way. Don’t waste your time with something like, “Is it true that you guys shun your own family members?” Many of them will deny it if you ask it that way. Their excuse? Technically, they don’t call it shunning, which is the word you used when asking the question.

No, I’m really not joking. That’s really how they think.

But if you ask them, “Is it true that you refuse to talk or interact with family members who have been removed from the congregation for serious wrongdoing?” many more will admit it then. Just remember, once again, that their idea of serious wrongdoing isn’t the same as yours and mine.

I think shunning and using emotional blackmail to force people to do what you want should have made the list of serious wrongdoings that are in the Bible. But what do I know? I’m not a professional therapist or a psychologist, right? (Check those links to find out more…)