Here you'll find book, DVD, and movie reviews. You'll also find commentaries on genre TV shows (whatever I'm watching) and nostalgia from our dear old past. Sci-fi, fantasy, horror...it's all good. And it's all right here.

I just saw Iron Man, the movie. First things first: it didn't suck, which means my review won't be as mean spirited and evil as you'd wish. The movie was certainly enough to keep me in my seat. For someone who has trouble sitting for more than a couple hours at a time (I get debilitating migraines and junk) that's a big deal. Iron Man also delivered for Robert Downey Jr. (a.k.a. Tony Stark) whose star is finally rising again. Made me proud to be a child of the 80s. Best of all, Gwyneth Paltrow didn't get on my nerves. This was easily her least annoying role ever. I even thought she was totally bangable in this flick, which proves how un-annoying she truly was. Way to go, Iron Man!

I've only recently discovered House M.D. It's one of those shows that I'm almost glad I missed during it's early years. Now, I have a sh*tload of episodes to watch and I don't have to wait a whole week in between doses. Let me start my review by saying this: No, I don't wish Dr. House was my dad. (That honor remains with the T-800 and Sauron, Lord of Mordor.) I would be very pleased to have him as a crazy uncle, though. Sort of like Dexter Morgan from Showtime and that series of books.

Continued at the link...

In light of the 2nd episode airing Monday night, I have added a small commentary to yesterday's review of Terminator: The Sarah Connor Chronicles.

Here it is 1:00 in the morning and I'm writing about Terminator: The Sarah Connor Chronicles. So let me jump right in with the good news: it didn't suck. I'd probably watch it again before Blade: The Series or anything like that. (Anybody wanna ice skate uphill?) I still can't rate it up there with the likes of Firefly, Farscape, or Heroes, but it managed to hold my attention for an hour. Even better, it looks like the writers are going to play around with time travel and whatnot for us. So if you haven't seen Terminator: The Sarah Connor Chronicles yet, you might just want to catch one of the millions of re-airings that will surely be happening over the next week or so.

is like. Well, do you remember those good ol' Mad Max movies from the eighties? Not to mention the smell of that pig crap they used to make gasoline? Good. Now try real hard to imagine Mel Gibson as a boobless Ukrainian chick. Note that this can most easily be done while watching Mad Max: Beyond Thunderdome. (So beware!) Got it? Alright. Now imagine that Miss Mad Max is pretty much built from nothing but teeth, hair, and gristle (like your standard Milla Jovovich or Ali Larter type). Then toss her into the world of Day of the Dead (also from the eighties) and give her Jedi powers and you're all set. You are now channeling Resident Evil: Extinction

! Congratulations. What's that, you say? This movie doesn't suck as bad as Resident Evil: Apocalypse

, but it isn't as entertaining as the first Resident Evil movie

either? Well, now you're just channeling my opinion of this moderately substandard film. Get out of my miiiiiind!

. It moved along quickly, there was a lot of tension as the characters tried to remember who they were really were, and it had an attractive Hispanic chick who kicked total a*s. Beat that, my ever sinewy Milla Jovovich! If you can.

Review: I Am Legend

I finally saw I Am Legend this weekend. No, not the dried up old Vincent Price

version or even the Charlton Heston

one. I've seen those smoking turds and suffered for it. No, I'm talking Will Smith's I Am Legend. I was hoping this would be the definitive "one movie to rule them all" version I'd been hoping for.

Look out for spoilers!

For those of you who missed it last week, the SciFi Channel's Tin Man will be back today from 5 to 11 P.M. This is supposed to be a reimagining of The Wizard of Oz, but it feels more like a totally different story to me. The links to the original are tenuous at best. And I'm not sure the story's Tin Man ... who isn't even made of tin ... plays a big enough part to earn the title role. Still, my wife loved the mini-series and I thought it was pretty good. Many have billed Tin Man as a darker version of The Wizard of OZ, but I think that's pushing it. It's certainly more adult and less "cutesy" for my tastes.

News And Reviews For Geeks:

, has been out for a little while now. To me, the Chronicles of Thomas Covenant is sort of like the Lord of the Rings. Only Donaldson's themes are darker and more complex. (My opinion, of course) My copy's on the way, but you can check out my review of the series overall here.

It was shows like Battlestar Galactica that taught me how much of a let down Star Trek really was. Farscape, Firefly, Galactica ... all of them made Star Trek feel like it was standing still. I still like Star Trek, but when compared to these other creations, it feels light weight. Of them all, only Battlestar Galactica survives. After a disappointing third season of Galactica (for me, at least) I was starting to worry. Then BSG "Razor" rears its ugly head and I'm all smiles again. 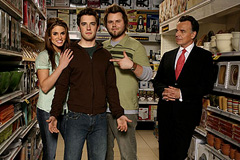 Thanks to my local affiliates, who refuse to allow Dish Network or DirecTV to broadcast most network channels in my area, I was forced to view CW's "Reaper" on someone else's TV. (Dirty rotten %@&#$!!!) If you want to know what Reaper is all about, try to imagine a cross between Chuck on NBC and Fox's Brimstone. Now imagine something that's a good deal funnier than Chuck and better made than Brimstone with perhaps a touch of Employee of the Month thrown in for good measure. There, now you're starting to get the right idea.

Despite our impending marriage (still waiting to hear back from Michelle Ryan as noted in the bottom left of my web site) I have to mark the pilot for Bionic Woman as good, but not super. I still think the show has a lot of potential and that further episodes will make me totally subservient to Michelle's talent as well as her hotness. The thing is that Bionic Woman's first episode was a little slow as many TV pilots tend to be. I also had a little trouble swallowing the idea that she was made bionic just 'cause her boyfriend wanted to give her implants to save her life. (Most guys think about doing this to their girlfriends, but for different reasons) I get the feeling that Bionic Woman would have been better served by a two hour premier that would have let them go nuts instead of just the one hour deal they gave us. But, you take what you can get.

I was always a fan of the Blade

movies. I even had the musical score

. So when I heard that good old SpikeTV was running a new series about the vampire killer - one that was made by the guy largely responsible for the movies to boot - I had big hopes. 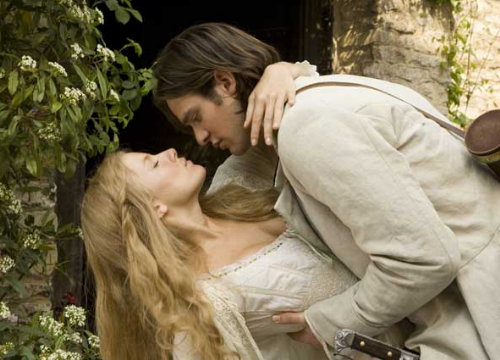 The commercials for Stardust pretty much convinced me that the movie would totally suck. Naturally, my wife sat up and clapped when we saw the first commercial on TV, so I knew I was screwed. And not the good kind of screwed, either. These commercials made Stardust look boring, flat, stale ... you know the adjectives I mean. So when we went to see the movie for real, the only questions on my mind went something like, "Is it really going to be that bad?" and "Will she hate it as much as I'm about to? I sure hope so." After all, shots of Robert De Nero dancing around on the deck of a flying seaship and Michelle Pfeiffer going all spooky like Frodo from The Fellowship of the Ring

isn't my idea of a good time.

I've been meaning to do a review of Burn Notice for a while now. The thing is that most of USA Network's programs are a little too "cutesy" for me. Even my wife, who normally loves that kinda stuff, has grown tired of Psych.

remains a favorite of hers, and I'll admit that I had no trouble stomaching it for the first couple of seasons or so. For me, Monk has become the Home Improvement

of the USA Network; I already know what's going to happen every single episode and that just bores me. "Oh! What's this one about? Is Monk's quirkiness going to get him in trouble again? Yuk yuk! Aw, I never thought he'd figure out yet another mystery! That stinker." Finally, at long-long-last, USA Network gives me Burn Notice!

Read my review of Jekyll! The show is just getting started on BBC America!

I've only seen the first episode of Jekyll on BBC America, but I'm already enjoying it. Like many things BBC, the show is a little different than you might expect. I plan to watch the whole series and will update this review when I've seen'em all.

If the visual style and dialogue from 300

got its freak on with the basic story line from Soldier

, the grisly outcome would have to be Pathfinder

To many, The Chronicles of Thomas Covenant is sort of like the other Lord of the Rings trilogy, except there will soon be ten novels in all. If you're like me, you'll find the complicated moral issues faced by the Unbeliever far more interesting than the tale of straightforward, good versus evil found in Rings. Thomas Covenant is a leper (yes, I actually said leper) who is taken out of our world and asked to fight a great battle on behalf of a Land and people he doesn't even believe in. As far as the Unbeliever is concerned, the Land is just a dream that he wants to wake up from.

Yep. That's me all right. Would I lie?

Gird your loins for Uncyclopedia hilarity! I'll find something funny on their site for you right here every gosh darn Friday!

The one force great enough to keep me from going totally insane. (Sorry God.)

Pitifully inaccurate Conservapedia entries will be posted whenever the heck I feel like it.

Today, the internet's most unbiased encyclopedia brings you ... wait for it ... Evolutionism!

The CreationWiki actually has an entry on the decline of atheism for some reason. I don't know if the CreationWiki will be a regular feature at AGN or not, but this might be worth a look.

So Who Am I Proposing To Now?

Bionic Woman may not be your favorite show, but I have three words for you: Big. British. Boobies. 'nuff said.

And now, the Atheist Geek brings you...

Go here for even more links that are Atheist Geek approved!

Why Some Jehovah's Witnesses Are Abusive Toward Ex-Witnesses - Part 3

Is The Watchtower Society Too Controlling of Jehovah's Witnesses?

Advice With Atheist Pet Peeves:
Ever Heard This Line? "You Sure Talk A Lot About God For Someone Who Claims They Don't Believe!"

Featured article for believers who want to understand atheists:

One Reason Why Atheists Don't Believe: Where Is God When There's So Much Evil In The World?

Featured submission on the Blog of Darkness:

Farewell To The Master!