Atheist Geek News » Announcements » Billy, The Creepy-Ass Spider That Lives Under My Desk

Billy, The Creepy-Ass Spider That Lives Under My Desk

I realize this isn’t my usual AGN fodder of choice, but between my computer problems, migraines, and nitpicking through my own private little essay about the Watchtower Society, I didn’t do much here online last month. So tough nipples. Here we go.

I was at work about a month ago (I try to show up at least twice a week so they’ll keep me around) and started cleaning up around my desk. I was sweeping when I noticed a big-ass spider just sitting there by a bug trap. He had one leg leaning against the entrance, waiting for something to come out so he could chow down. (I don’t think Billy understands how bug traps work.) He was taking a drag off a cigarette with another leg when he noticed me. “Sup,” he said, then went back to work as a tiny plume of blue smoke wafted to the top of my desk. Well, at least now I knew where that damn smell was coming from.

Anyway, I decided to leave Billy alone for a while. That’s his name, by the way. Don’t question how I know such things. Anyhow, I waited an hour and Billy was still there. I was afraid to look, but I could hear him puffing away. “Dammit, Billy!” I thought. “I’ve got work to do. Can’t you hang out by another bug trap?”

Don’t get me wrong. I could see that Billy had it tough. He had one leg missing and was probably an Ex-Jehovah’s Witness or something. I could tell because he was still wearing a tie and he had a flaming ball of old brochures he was using to keep his cigarettes lit. He had placed it behind the trap, presumably to drive something out so he could catch it in his mouth. Damn clever, I have to say. Poor little fella. His choosing my desk to hide under kinda made me feel … well … sorta special. I don’t have many friends, ya know.

Still, my boss had already warned me about smoking on the job, even though I don’t smoke. And I had shit to do. So something had happen with old Billy. 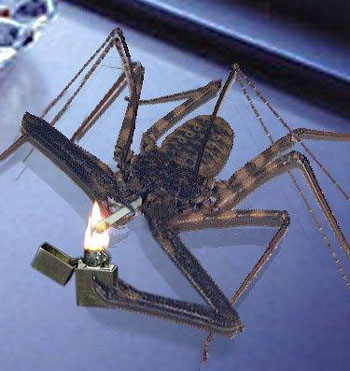 I showed the spider to some of my co-workers, who were scared out of their wits. “Ah!” they cried, pointing at the big hairy spider. “That’s the sonofabitch who’s been parking in my spot!” one of them insisted. “He’s got a better car than your Chrysler, Geek!”

That tore it. Time to die, Billy.

I got my broom out and jabbed it at Billy. He jumped–fricking jumped–over the broom! Then he just looked at me, his cigarette askew, mouth agape. “Geek!” he cried, deeply hurt. “What’s up with that, man?!?” His front legs spread out in a gesture of innocence and outrage. And it was true. He hadn’t really done anything to me. I started to feel kinda bad. I just didn’t want him to jump on my leg and try to kill me when I went back to my desk. That’s all. And now, I had hurt him deeply. Man, but I’m an ass!

I was about to apologize when Billy stamped out his cigarette and threatened to key my beloved Chrysler. The rage took me. I jabbed at him again with clenched teeth. But Billy was like a gymnast or somethin’. He did a somersault over the broom and hauled ass. I’m pretty sure he was giving me the finger, too. Can’t say I blame him.

I miss Billy. Sometimes, I think he’s that pervert following me home in the black sedan. Then I realize it’s just that P.I. my father hired to track my every movement for the past 10 years. Not really that close, Dad and I. But Billy … I don’t know. I just can’t help but think I wronged him. Deeply wronged him. And it bothers me.

Every so often when I’m at work, I hear the sound of tiny lips taking a drag off a cigarette. Then a plume of tiny smoke emerges, and I smile. Perhaps, some day, I’ll make it up to Billy. Then maybe he’ll eat my enemies, knit me a sweater with his webbing, or teach me to throw a football like my Dad never did. The possibilities are endless.

I’ll leave a pack of cigs out for him when I go back to work. Maybe offer him some flies, ya know, whatever he likes. Just a gesture, ya know?

For those who don’t like my story about Billy the smoking spider, here is a smoking hot babe instead.

Please love me. Hey, this is how Billy would see her too! ::Sniff::

The Atheist Geek is a former Jehovah's Witness turned secular humanist. He's a lifelong sci-fi geek and a writer wannabe.
View all posts by The Atheist Geek →
Tagged billy, bullshit, Humor, spiders, under my desk. Bookmark the permalink.

3 Responses to Billy, The Creepy-Ass Spider That Lives Under My Desk