The Atheist Geek is a former Jehovah's Witness turned secular humanist. He's a lifelong sci-fi geek and a writer wannabe.

I’ve only seen the first episode of Jekyll on BBC America, but I’m already enjoying it. Like many things BBC, the show is a little different than you might expect. I plan to watch the whole series and will update this review when I’ve seen’em all.

Basically, the series starts right in the middle of things. Hyde has already emerged from inside of Tom Jackman’s own personlity and now the two are trying to learn how to live in the same body. Hyde is like a supernatural force of evil (jerk stole my childhood fantasy!) who’s unnaturally strong, fast, smart. That kinda stuff. So there isn’t much you can do if he wants to hurt you, eat you, or steal your lunch money. 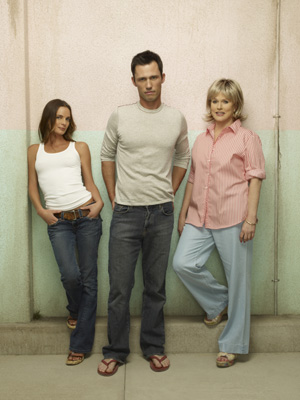 I was always a fan of the Blade

movies. I even had the musical score

. So when I heard that good old SpikeTV was running a new series about the vampire killer – one that was made by one of the guys largely responsible for the movies to boot – I had big hopes.

I’d like to think that I’m not one of those genre geeks who gets overly sentimental about TV shows and that I can be pretty objective. Even if I think a show will absolutely stink, I will quickly admit it if I’m wrong. Well, despite having everything going for it, the tv series of Blade

was a bit of a disappointment. It wasn’t awful, but it was definitely weak.

First, most of the acting was pretty uninspired. This, combined with the mediocre special effects and stunt work gave it a really B-movie feel. Kirk Jones just wasn’t right playing Blade. Jill Wagner was supposed to be the major babe of the series as Krista Star. But her delivery was so flat that she’s doing car commercials now. Speaking of flat, her greatest asset was whatever they were using to simulate major boobage beneath her wardrobe. Nice job. Except for the scenes where she wore stuff too slinky for the “augmentation” to work. And yes, I noticed! I’m a guy. Come on. Still, they were nice to gawk at. Note that, according to Wikipedia, the production team had tried to get Wesley Snipes and Jessica Biel on the show but couldn’t, so the money for the show was scaled back from their original plans. This could explain some of the shows problems.

Blade’s partner, Chen (Nelson Lee) was probably the best actor of the cast. Totally believable. Neil Jackson was good as Marcus Van Sciver. So was Jessica Gower as the blond and bejugged Chase. Some will disagree on the last two, but they were basically playing over-the-top vampires, so you really have to grade them on a curve.

On the plus side, SpikeTV’s censors are more relaxed than most other network’s. If you’re a free speech nut like me, that’s a good thing. Or even if you just like gritty realism in your entertainment.

At any rate, this first DVD only has the pilot. You’ll probably want to wait for the whole series to come out … unless you can’t wait to stare at Gower’s and Wagner’s hotness. But you’ll get more of that when the whole series comes out, which most likely will include the pilot as well. Still, if you can’t wait, here’s the link.