Atheist Geek News » Ex-Jehovah's Witnesses » Why Is It So Hard For Ex-Jehovah’s Witnesses To Stand Up To The Watchtower Society’s Faithful?

Why Is It So Hard For Ex-Jehovah’s Witnesses To Stand Up To The Watchtower Society’s Faithful?

Most ex-Jehovah’s Witnesses know how hard it is to stand up for themselves when Witness friends and family come a-calling. Our brains seem to shut down and go all blinky when the questions and accusations fly. So we just stand there and wait for the Witnesses to leave us alone. Then, as we watch them back out of our driveway, the responses we wanted come flooding back. We feel like fools because the answers weren’t there when we needed them!

So where the hell did they go?!

Why Is It So Hard To Stand Up To Jehovah’s Witnesses?

Some ex-Witnesses get over this deer-in-headlights stage within the first few months after they’ve leave the Kingdom Hall. Others need decades before they can stand up for themselves. But if our reasons are sound (and they usually are) why do we cringe when Witnesses confront us? Like so many things Watchtower related, I think there’s an underlying psychology and — whether they realize it or not — the Witnesses who keep “visiting” us are exploiting it. This is more than just a way to shame us into doing what they want. It’s also very reassuring for them.

If we don’t have a leg to stand on in our own defense, the Witness gets to write off our rejection of their beliefs as petty and self-serving. Or as something to be completely discounted when reviewing their own beliefs. After all, if we know what they know about “The Truth,” shouldn’t we be as convinced of the Society’s authority as they are? The realization that we are not convinced is damaging to their ego, not to mention their faith. So — sad to say — it feels good for them to smell the fear on us. This sort of bullying can leave former Jehovah’s Witnesses feeling ashamed.

Don’t give them what they want. Stand up for yourself. If you’re having trouble, half the battle lies in understanding why you froze in the first place. Here are some of the reasons we freeze.

We’re afraid of being judged.

As humans, we have a need to be understood, especially by friends and family. Our standard approach to having our views challenged is to try and convince the challenger we are right. But we know from personal experience that Jehovah’s Witnesses are fanatical about their beliefs. They will never allow themselves to be convinced of anything we say. Since we already know we can’t win them over, we choke and do nothing while they berate us for having a different point of view. But if we keep our responses simple and stop trying to convince them we’re right, this fear can be a lot easier to deal with.

Instead of falling into this trap, focus on defending your point of view and the choices you’ve made. For example, when they tell you that you “know” the Society has “The Truth” and try to shame you for shirking what you “know” you should be doing, don’t even try to convince them that you’re decisions are right and the Society’s teachings are wrong. If you do this, you’re literally asking them to judge you and your motives. That’s giving them all the power they need to take control of the conversation. Instead, try telling them something like this:

“Actually, I don’t ‘know’ that the Society has The Truth because I think they’re wrong. And as for what I should or shouldn’t do with my life, I’m really not sure how that’s for you to say.”

Notice that this response isn’t an attempt to plead your case. It is an assertion of fact: you really don’t believe the Society has “The Truth,” and you are the authority on your own thoughts and opinions. Not them. Even better, you haven’t given them anything to work with. They can’t flip through their books to argue over the details with any of this. All they can do is move to another subject or try to drag some usefl details out of you. Unless you’re ready to have a real debate with them, you’ll want to make this as easy as pulling teeth by sticking to simple, direct responses like the one above.

Witness: “But the Society has gotten us this far. Why not trust them now?”
You: “Actually, I’ve gotten me this far. And I hope to do better in the future.”

Witness: “What will your parents think?”
You: “I don’t know, but I have to live my own life.”

We’re afraid of the consequences of putting up a fight.

Many ex-Witnesses are confronted by friends and family who might shun us if we resist their efforts at conversion. We may not be prepared to lose these people, so we cower in silence until they’ve had their say. That’s because any resistance could give them the ammunition they need to get us disfellowshipped or may give them enough reason to simply cut us out of their lives. This reaction is understandable. But can an ex-Witness hang on to their friends and family for long after they’ve left the organization? The answer is usually no.

Even if we aren’t disfellowshipped, we’re still bad associates in their books. As long as you allow them to blackmail you into submission, they’ll have all the power in the relationship. In most cases, they’ll use it. This is bad, folks. Real bad. You’ll wind up hating them at least as much as you love them in the long run if you don’t do something. Once you decide to leave the organization, you should decide how far you’re willing to go in your own defense before the confrontations get underway. Otherwise, whatever relationship you had with them could sour and turn to poison.

There is an alternative to fighting fire with fire. Instead of standing up for your decision and your beliefs, you can choose to stand up for your decision not to fight with them at all. You can do this by informing the Witness of your desire to maintain some sort of relationship with them. But tell them you don’t want to ruin that with a pointless confrontation. So when you feel “the talk” coming on, tell them outright that you refuse to engage in a debate. They will usually push for a confrontation anyway and refuse to back down. Neither should you.

Why is this a good idea? Because they can’t have a confrontation if you refuse to engage. All they need are a few details about your reasons for leaving the Society to launch an offensive. That’s why you must refuse to participate right from the start by not giving them ammunition.

They may argue that they have to try and convert you because Jesus commands it. They may insist that they’re afraid you’ll die in Armageddon and they have an obligation to save you…etc….so pleeeease give them something to hit you with! These are just excuses to make you feel bad for withholding information. Don’t back down. Tell them that you have no interest in “corrupting” them with your worldly ways and that you can’t stand up for your point of view without being disfellowshipped, so the the whole discussion is unfair. Unless this changes, you refuse to participate. Period. Then tell them that you will ask them to leave if they insist on pushing this issue. End of story. Let them throw as many objections at you as they want. Just stick to this explanation and don’t back down.

If they push the issue more forcefully, keep your word by asking them to leave. Go to the door and open it, then usher them outside if you must. But stick to your guns. This is the only way you’ll maintain your self respect and a balance of power in the relationship. Make sure to point out why you asked them to leave: because you offered them a truce and they broke the terms of that truce.

Don’t even mention this when you see them next. If they want to talk about it, then don’t help them by bringing the subject up. Be the bigger person. As far as you’re concerned, it’s water under the bridge. If they try to talk about it, remind them that you have already declined to discuss the issue and refuse to go any further.

Ultimately, if they won’t play fair, then you must refuse to play at all.

We’re unprepared for a confrontation.

Maybe we no longer believe the Society’s teachings, but aren’t sure what we believe right now. Or maybe our initial reasons for leaving the Watchtower Society were largely emotional and hard to articulate rationally. Either way, many of us are on unsteady ground when we first decide to leave the organization. Then the Witnesses come knocking so they can hit us when we’re weak.

The best bet here is to take the advice I gave you in the previous entry (“We’re afraid of the consequences of putting up a fight.”) by refusing to engage until you’re ready. It sure beats evading them like frightened mice or standing there, our heads down, while they let us have it. Try telling them that you need time to sort things out and that — until then — you don’t want to do anything that would cut yourself off from the Society completely, like getting yourself disfellowshipped by saying something now that you might disagree with later. In this way, you’re not only giving them some hope that you might return (which is better for them than leaving empty handed) but you’re also suggesting that they might ruin any chance of your return by pushing the issue prematurely. Apply the techniques I already gave you from there.

Note that they might ask you when they should return. Especially if they’re Elders. Tell them you don’t know and that you need some space right now. This might be a great opportunity to open the door and bid them farewell. 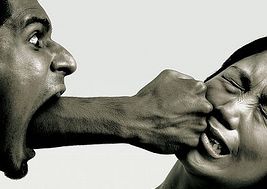 Years of repetition and other forms of conditioning don’t wear off overnight. Many ex-Witnesses cower before Elders, family, or other people who carry a mantel of authority when they confront us about our beliefs. This was exactly what was expected when we were Jehovah’s Witnesses. Time must pass before these affects fade.

Newly minted exxers will probably want to check out my advice in the previous two sections (“We’re unprepared for a confrontation,” and, “We’re afraid of the consequences of putting up a fight.”) to help them deal with this. Just remember, you’ll feel better once you stand up for yourself. Even if you can’t confront them about the differences in your beliefs, just standing up to them about your unwillingness to debate is preferable to being walked on.

More About Standing Up For Yourself

I have written other articles right here at Atheist Geek News and Austin Cline’s Atheism and Agnosticism About site. These offer techniques and advice for ex-Witnesses who are being hassled by Jehovah’s Witnesses for their beliefs or over their right to live their own lives. They might prove useful. Here are a few to consider:

My articles for Ausin Cline.

Advice For Ex-Jehovah’s Witnesses: “The Society Has Gotten Us Both Through The Tough Times. You Owe Them Your Loyalty!”

Advice For Ex-Jehovah’s Witnesses: How To Handle It When They Try To Convert You

4 Responses to Why Is It So Hard For Ex-Jehovah’s Witnesses To Stand Up To The Watchtower Society’s Faithful?