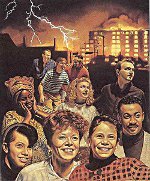 Tip #1: Tell Them To Slow Down

Sometimes, Witnesses aggressively browbeat ex-Witnesses on purpose because they think we need a kick in the pants. Other times, they’re just getting worked up because they truly think they’re right and they’re determined to make you think it too. Whatever their motive, there’s usually a pretense of having a civil conversation at work behind every reconversion attempt. Nobody wants to be interrogated, and that forces the Witness to pretend they just want to talk so we won’t run for the hills. We usually know what’s about to happen, but even the tiniest pretense is enough to cement us where we stand.

Still, when a Witness starts barraging you with questions faster than you can answer, doesn’t it seem perfectly fair to ask them to slow down? “Hey,” you could tell them, “let me have a minute to think so I can at least get the words out!” It might even force them to realize they aren’t treating you the way you’d like.

You can ask them to slow down as many times as you need during the same conversation. If the Witness starts to get impatient with this, you could remind them that you’re not the one with a library of books containing ready-to-go answers at your disposal.

Or you could even tell them that you feel like you’re being interrogated and threaten to drop the “conversation” altogether. This is a critical moment for your interrogator; the Witness must decide to maintain the pretense of civility or to admit they’re only interested in converting you by any means necessary. Such an admission can provide a socially acceptable out for any exxer who feels they’re being badgered to death. But I don’t recommend it. It’s always better to stand your ground. Otherwise, you’ll only embolden them.

Tip #2: Don’t Hesitate To Tell Them When They’re Wrong

“But anyway, we both know it’s the truth … right?”

“You just left the truth because you didn’t like the way the elders treated you!”

“This system is coming to an end soon and it’s time to fulfill your obligation to Jehovah if you expect to get through it!”

These are just a few of the assertions that Jehovah’s Witnesses make when they start putting the screws to us. We’ve all heard them. And you gotta admit, it takes nerve. as former Witnesses, we don’t believe any of these things are true any more. Yet Jehovah’s Witnesses keep repeating them as if to tell us–despite our true opinions–that we still think as they do. It’s as if they think we’re too stupid to know our own thoughts. So why leave these wild assertions hanging in the air, untouched, as if you agreed with them?

So every time they take a shot, you need to shoot those bullets down. All you have to say is, “I don’t agree with that.” If they stop talking at the interruption, you can fill in the silence with a quick summation of how you really feel. Don’t waste your time explaining the details of your reasoning to them. That only gives them a new angle of attack. Just tell them something like, “I don’t believe it’s the truth any more. And I don’t believe in Armageddon. So threatening me won’t scare me back into the Kingdom Hall.” Or you could say, “It’s true that I didn’t like the way the Elders treated me, but that’s hardly the only reason I stopped going to meetings.” You could even throw in something like, “I really don’t appreciate it when you put words in my mouth. If you really wanted to reach out to me, you’d ask me what I think instead of telling me how I feel.”

Even if you don’t have the courage to go on the offensive like that, just keep shooting their assumptions down. Every error they make reduces their authority and makes it easier for you to stand up to them. It’s always better to frame your opinions in your own way. Never let them do it for you.

If you’re afraid of being disfellowshipped, then you’ll have to keep your objections vague. Instead of telling them outright that you don’t believe their assertions, you may have to ask them how they know they are true. (See tip #4) Or you could just shrug off their assertions as if they don’t matter to you. If the Witness asks if you still believe in the Society’s teachings, you could accuse them of threatening you or trying to get you in trouble, all without answering them directly. Be forewarned: whether you’re fading or simply deciding to go inactive, debating a Jehovah’s Witness when your afraid of being disfellowshipped is like fighting with one hand tied behind your back.

Tip #3: Keep Your Cool … Even If You Want Them To Know You’re Getting Angry

As I’ve said in other articles, Witnesses often mistake anger for a sign that they’ve struck a nerve. To them, striking a nerve usually means that you “know”–on some level–that they are right and you are wrong. That’s not a total victory for them, but they’ll end up telling anyone who ever knew you at the Kingdom Hall about it. That will only encourage more evangelists to bug you. So don’t go there.

Instead, remain calm and patient, as if you’re indulging them in a childish tirade. (Which isn’t far from the truth anyway.) If you want them to know you’re getting mad about their bad behavior, just do what I do: look them straight in the eyes until their attack is over, giving quick responses to their assertions all the while. Then, when they run out of steam, ask them if they’ve finished. You’ll probably get a blank stare. Then you can ask them to leave. They won’t be happy about it, but they’ll get the message without twisting it into a moral victory for themselves.

Tip #4: Remind Them That It Isn’t True Just Because They Believe It Is 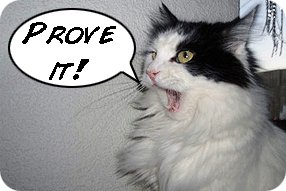 If you want to turn the tables a bit and get aggressive, you could start asking them to defend their assertions.You could do this by simply asking them, “How do you know that?” whenever they make some statement that they assume to be factual when it isn’t. Always remember that beliefs do not equal facts.

Bear in mind that many Witnesses will attempt to back up their claims as they’ve been trained to do. Remember, they have the Society’s narrative at their fingertips, so this can seem tricky. In reality, many of their assumptions are built on other assumptions. You just have to keep pointing out each assumption as it comes until they run out of them or give up trying. Here are some phrases to keep at the ready:

“But where did the Society get their information?”

“That sounds more like an opinion than a fact to me.”

“Seems like you’re getting all of this from the Society. What do the real experts think?”

“That doesn’t make it true.”

“So you’re telling me that Jehovah told you that personally?? Then how do you really know it’s true?”

Secular atheists will find this tip especially useful because we don’t have many assumptions in common with Jehovah’s Witnesses. For instance, if the Witness turns to the Bible to back up one of their claims, we could say, “Why should I accept the Bible as a source of authority?” Exxers who remain Christian may not feel comfortable going there. Exxers who fear being disfellowshipped may also have to limit their use of this technique.