Humanize Yourself In Four Steps When Evangelists Objectify You

Step One: Recognize When They’re About To Go There And Why 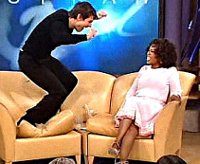 We can usually sense it when an evangelist goes into full conversion mode. First comes the awkward segue or even the announcement that they’d like to talk about their religion now. Then they’ll ask a few questions to help them narrow down which pigeonhole we belong to. Finally, they’ll start blurting out whole arguments about points we haven’t even made yet and ignore any responses that don’t match the role they’ve assigned to us. After being thoroughly offended and frustrated, we ask them to leave us alone. Naturally, they refuse. Then it gets really weird.

Man, it sure sounds like being converted is gobs of fun. Wonder why it doesn’t work more often? That’s irony you’re hearing in my keystrokes, BTW. Why do evangelists do this when it only angers most people?

Objectifying potential recruits does offer them a few advantages. Surprisingly, one is that it pushes us away. If they cease to feel for us, they can come after us like gangbusters without feeling like a heel. It also renders them numb to our views. We can’t convince them that we’re the ones who are right if they aren’t really listening to us. Reverse-conversions can happen, even if we aren’t trying to convert the evangelist. Some former believers are eloquent … or even right … and can inadvertently force a devout believer to rethink their own beliefs. Many evangelists will objectify us as a subconscious means of protecting themselves.

The biggest advantage of objectifying others is that it allows evangelists to simply get the words out if they’re afraid to speak up. It’s hard to look another person in the eye and tell them they’re wrong about everything just because you or your religious literature say so. It’s much easier to do it when you’re looking them in the forehead and ignoring half of what they say.

Once they’ve ceased to see you as a person, evangelists have a list of strategies they use to maintain their distance. Even in the face of our growing anger and disinterest, these tactics will keep them from taking us too seriously as fellow human beings. Try short-circuiting those strategies to reconnect with them and they’ll start sensing the needless aggravation they’re dispensing. They should at least realize that they’re doing more harm to their cause than good if they have a functioning brain stem. You might even succeed in having a real conversation with them.

Here are some of their strategies and what to do.

Dehumanizing Strategy 1: Elevation, Because They’re Better Than You And You Need Them 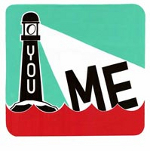 One strategy they’ll use to maintain the distance is to talk down to us. They’ll elevate themselves to the role of teacher (“I can help you find happiness and eternal life…”) or judge (“Someone needs to set you straight for your own good…”). By elevating themselves above you, they are increasing the distance between you while also trying to assert control of the conversation. You can short circuit this strategy by elevating yourself up to their level. Or, if you’re careful about it, you can try deflating them back to your level.

For instance, some elderly Jehovah’s Witnesses like to announce how many years they’ve been in “The Truth” as a way of over inflating their qualifications in a debate. They’re essentially telling you that you should listen to them because they’ve been doing this longer than you have. You can counter this by noting the years of intense research and thought you’ve put into your own views and by noting how many sources of information you’ve drawn upon. They, being Jehovah’s Witnesses, only have one source because Witnesses are strongly discouraged from considering any viewpoints that contradict the Society’s. You’ve probably got a variety of real experts to back up your views; they are relying on strongly biased amateurs as their only source of information. Note that citing both of these points will not only elevate you but diminish them at the same time. Hopefully, the two of you will meet somewhere in the middle. BTW, just so we’re clear, their source of information is the Governing Body. Unless they’ve been hearing voices or talking to a burning bush, it’s not God. Don’t be afraid to point that out if you must. 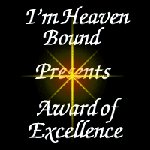 Another example of elevation is when an Elder or church leader points out their rank. They are basically saying, “I outrank you! Now you gotta shut up and listen!” Some may even quote scriptures about obeying church leaders to reinforce this point. You could respond by informing them that this isn’t about rank and that you’re not impressed by this statement. Or you could tell them that you don’t appreciate it when someone uses scripture to bully you into obedience. Both statements will deflate them back to your level.

One word of caution: whatever you do, don’t make the mistake of reversing your roles by trying to put yourself above them. Remember, the point is to draw them closer to you, not push them away. Then you can make them realize you’re a person, not just an opportunity to make another convert.

Dehumanizing Strategy 2: Humility–Or It’s All About Them, You Big Meany 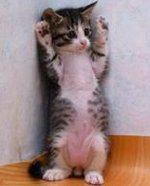 More experienced evangelists may try to play the humble card. They’ll wax poetic about how much they want to save you and tell you repeatedly that they aren’t deciding what’s best for you out of arrogance. They’re doing it because they care. (This is actually kinda weird when you think about it, but okay…) Then they’ll tell you how worried they are for you, that you’ll lose your chance for whatever reward their religion is promising, all in bid to make you feel bad for disagreeing with them while making themselves into the hero.

This is a clever strategy because it turns the tables on us. It makes you out to be a heel while focusing their attention on their own feelings so they don’t have to think about yours. It’s really just a more sophisticated version of the previous strategy and it often works. You can humanize yourself again by telling them how their tactics are making you feel. This pulls them out of the martyr’s chair and reminds them that you’re a person, too.

Dehumanizing Strategy 3: They’re Just The Messenger. Talk To The Hand … Er, To God  … If You Have Any Complaints

Bizarrely, many evangelists will try to swear off responsibility for bad behavior by passing the buck right to their authority of choice. It could be God, Jesus, or the Governing Body of their religion. The point is that you aren’t allowed to get mad at them for their own behavior. They’re literally telling you that they’re not responsible for their actions and it would be unfair of you to hold them accountable.

This is an easy way for evangelists to sidestep your objections and to jump back to whatever they were talking about before you dared open your mouth. They don’t even have to deal with your feelings because they’re just following orders. Hey, they didn’t choose to offend you, their god did.

You can short circuit this evasion by asserting the reality: they are the ones talking here, they are the ones who chose to have this conversation, and there’s no use in blaming the god they claim to love. Inform them outright that you hold them responsible for their own behavior. Otherwise, you’ll only embolden them.

Step Three: Tell Them Why They’ve Failed To Reach You

I’m not talking about a critique of how they formulate arguments or how they’ve gotten their facts wrong with this one. I mean you should tell them that they’ve failed to connect with you as a human being. Tell them how being talked down to makes you feel. Tell them that you want respect, you want to be treated as an equal, and that while a real conversation about religion might interest you a sermon does not.

In other words, remind them that you’re a human who doesn’t appreciate being treated like a sales opportunity. Make them realize that they haven’t just struck a nerve by hitting you with a hard truth. They’ve pushed you away from their “truth” and from them as a person. If you’re going to continue to be friends or family, they’ll have to treat you like friends or family. 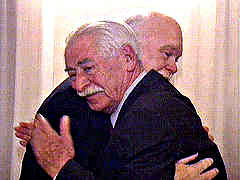 If you can make it past step three and arrive at an understanding, then it’s time to give them a chance to change. If they can forgive you for disappointing them (not that it’s their right to pass judgment…) then now’s the time to be just as big a person by letting them off the hook for their bad behavior. So long as they’ve learned their lesson and don’t repeat the same mistakes, of course.

If the goal is to reconnect with someone who’s let religion stand between you, this is your big chance. If the goal is simply to get them to leave you alone, forgive them anyway. You can always forgive them while hoping you’ll never see them again. Either way, closure will help you achieve your goal.