Atheist Geek News » Ex-Jehovah's Witnesses » Was The Sparlock Video Really Made By The Watchtower Society?

Was The Sparlock Video Really Made By The Watchtower Society?

Exhibit 1: The DVD Has Already Been Released To Many Jehovah’s Witnesses Across America!

Exhibit 2: A Member Of The Governing Body Is On The DVD! 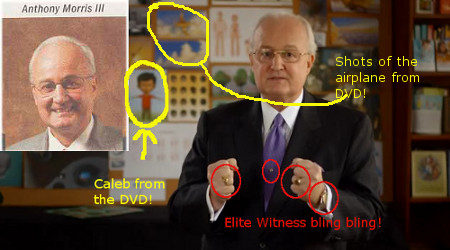 This one’s also a tad difficult to ignore. Anthony Morris III is featured in the DVD’s introduction. Anthony Morris, as suggested by the subtitle above, is a member of the governing body of Jehovah’s Witnesses. All you have to do is watch the video and you’ll see this for yourself. Or just look at the picture to the left.

NOTE: A friend of Atheist Geek News actually made a better photo. Who’d have thunk it? Not that my chicken scratch would be hard to beat. It’s bigger than this one and of better quality. You can see it here.

I concede that the introductory piece from Brother Morris was posted separately from the Sparlock video. That is to say that they appear on the internet as two, separate videos. Some naysayers will no doubt insist that there’s no way of proving they are on the same DVD together. How can Jehovah’s Witnesses know that Brother Morris is talking about the Sparlock video? After all, we ex-Witnesses are full of demons and lies and whatnot. (Darn us to heck!)

There are pictures of characters from the DVD in the background of Brother Morris’ video. One of them appears to be a picture of Caleb, the boy featured in the Sparlock video. There are also some images of the plane that was featured at the very start of the Sparlock video. These pictures are plainly visible while Morris is talking. So unless apostates have taken over ILM or something, I see no other way of explaining how those pictures got there. That is, unless you think the governing body is applauding our apostate lies for all to see?

Exhibit 3: The First Time The Video Was Posted It Was Promptly Taken Down By Order Of Watchtower Lawyers! 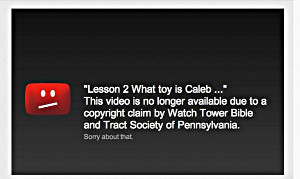 If the Society had no legal claim to the video, then how could they have it taken down? Doubters will surely say that it’s because the video is unflattering (in other words, because the way the mom talks to the kid is kind of cult-like and creepy) but there are tons of unflattering videos on YouTube and elsewhere about Jehovah’s Witnesses, the Watchtower Society, and even the governing body, yet they have not been taken down. Why would this one be any different unless there was a valid copyright claim by the Society’s lawyers?

I even mentioned the fact that the Sparlock videos had been pulled on my original post because I expected the new videos to be removed as well. To my surprise, the new videos remain. I guess the Society decided not to bother pushing the issue any further since they were only encouraging us. It was too late by that point anyway; Sparlock was already becoming a meme for the ex-Witness community to rally around.

I am trying to get copies of the cease and desist orders from those who received them for the original posting of the videos on YouTube. As soon as I have that, I will post it. But honestly, the fact that many Witnesses have already received the DVD with the video on it should be more than proof enough all by itself.

UPDATE: The image of the cease and desist is now available thanks to another friend of Atheist Geek News. Click here to see it.

Don’t worry guys, you’ll get your copies too. Then the reality will become all too clear.

Um, So What’s The Big Deal About The Sparlock Video Again?

This is one of those weird areas that Jehovah’s Witnesses and ex-Witnesses always stumble into sooner or later. So let me reiterate the true meaning of Sparlock.

Many Jehovah’s Witnesses have already denied that the video is real because it’s just plain creepy as hell. They say it’s an apostate joke because it shows the Society portraying some very manipulative behavior from parents in a positive light; a light that just plain weirds people out. Hence, doubters say that the video could not have come from the Watchtower Society. Instead, they say someone must have created it to make the Society look bad.

Later, once it becomes clear that the video was indeed created and distributed by the Watchtower Society, the naysayers will change their tune and accuse critics like me of twisting the truth, of creating a controversy that was never there, even though they doubted the video for the same reasons we criticized it! Namely, because it’s an example of the Society’s poor mental health.

Not so sure the poor mental health thing? Remember, a committee of Jehovah’s Witnesses – including members of the slave class – had to approve the DVD for production and no one noticed the obvious weird-factor! This suggests that, for the Society’s leaders, this is all perfectly normal and right. You decide what that says about them for yourself.

So, just for fun, I am posting some pics I took of conversations on Twitter about the Sparlock video. The fact that the initial tweet was about my article and that I think that’s totally cool has nothing to do with it. Really. I swear. Stop looking at me like that.

If I find anything good on Facebook (or if anyone wants to send something to me) I will post that too. These clips are just a taste so no one will forget what the reaction was versus what will be said about it later. Open them in another window if they’re too small to read on your screen.

NOTE: I have added another snippet of Witness comments and will continue doing so. Check back if you get bored. 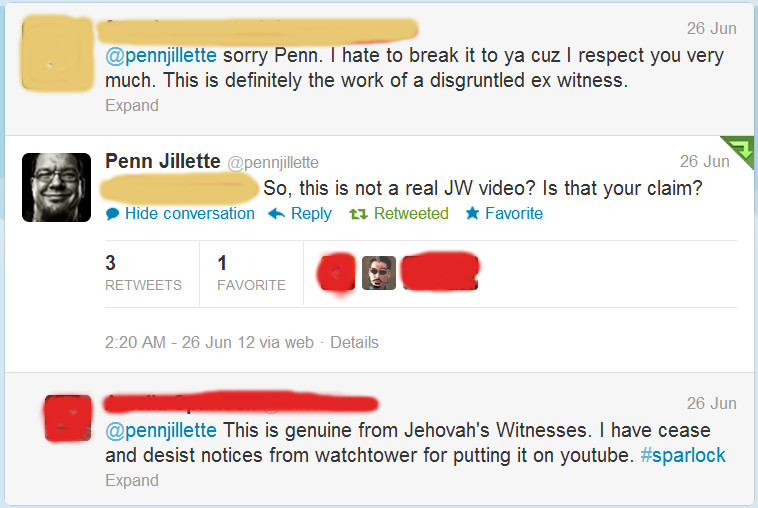 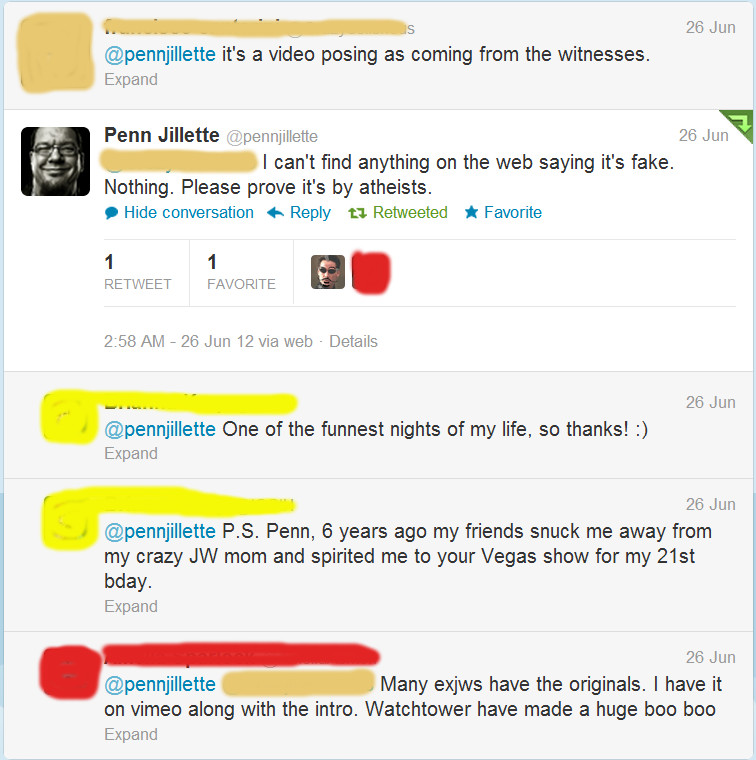 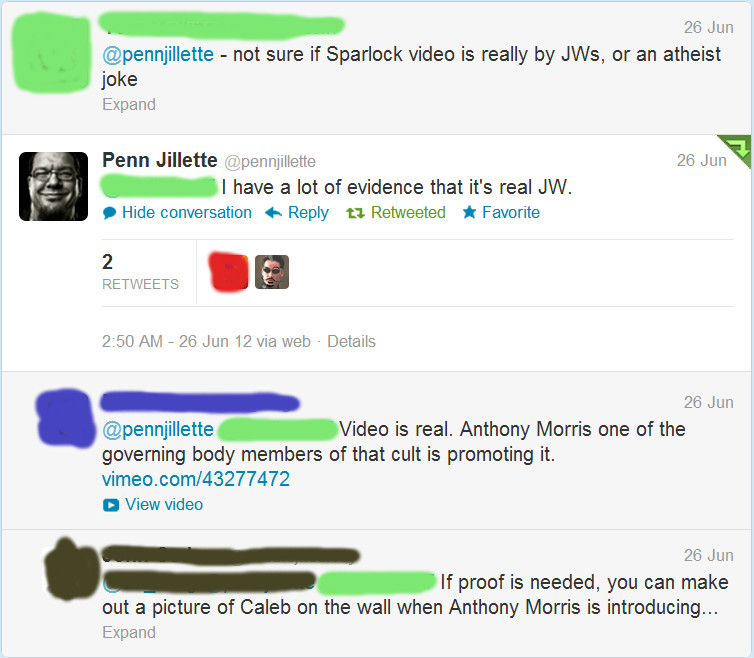 Sparlock doubters, you have been powned. Or is it pwned? Oh, you get my point! 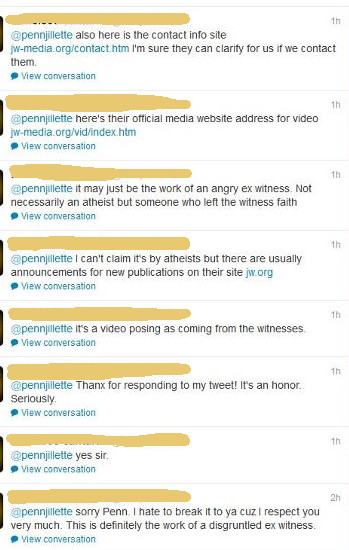 7 Responses to Was The Sparlock Video Really Made By The Watchtower Society?