UPDATE: My site appears to be fixed now. So I have expanded this post with more goodies, including a snippet of a conversation among some Jehovah’s Witnesses about the recent lawsuit AND a link to one that is still ongoing. Shockingly, their comments weren’t all that positive about the family. (GASP!) More below…

I’m pleased to report that this story has received lots of attention and is spreading across the web. Even MSNBC’s web site has picked it up, along with many others. So far, the reaction from so-called “worldly people” seems far more sympathetic to the victims than were the reactions of the Witnesses who have been leaving comments on those sites. If you check out the comments left at MSNBC’s web site…well, it ain’t pretty.

There is also a Facebook group who’s comments are…um…let’s just call them fascinating for now.

UPDATE: Another shock. The following morning I get up and (drum roll) the conversation mentioned above has been taken down. I managed to get a pic of it, however. I also submitted it to Lamebook, Failbook, and a couple other sites. Maybe one will post it. The image of the conversation appears at the bottom of this post for anyone who wants to see it and gag.

Meanwhile, other sites have started to run the story. And a new Facebook group has appeared in honor of the family.

Jehovah’s Witnesses: How come this story is missing from your official media website? – Yahoo! Answers

Secrets and lies have no place when dealing with child abuse

This one has pictures of Candace and the man who molested her: Candance Conti: molested by Jehovah’s Witnesses member at age NINE wins $28milion

Another is a declaration of the New York branch office’s assets which can be found here. (Ain’t that neat. Not so broke as we were led to believe.)

A question from JWD that might interest some of you: Does anyone have a pedophile policy timeline (for the WTS)?.

Here are some pics of documents relating to the actual case: Legal Stuff, Evidence that Candace Conti wasn’t after money.

Here’s a pic of the court’s deposition documents: deposition of Michael Lee Clarke.

Here’s a video response from the Society about the lawsuit! Jehovah’s Witnesses Official Media Web Site: Inquiries on Child Abuse. Note, however, that it’s copyrighted 2009 and doesn’t mention any specific details about the case. It appears to merely be a canned PR response from the organization regarding child abuse in general. If you’re hoping to see someone from the Society apologize or admit to any wrong doing, you’re already out of luck. To be fair, that’s hardly surprising so long as they intend to appeal the case. It sure would make a more positive witness, though. There’s also a transcript of the video here. It’s easier to quote from than the video, obviously…hint hint.

Here’s a video where someone attempts to explain the verdict in a way that’s easier to understand than many of the online articles have been.

And now, for that pic I promised you. Don’t forget to hover your mouse over the pic for an additional comment. 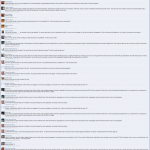 Hardly any Jehovah’s Witnesses in this forum gave a rats ass about the victims. But someone did have the presence of mind to delete the whole thing afterward. Delightful. Too bad I took this picture first. My favorite line from the evening? “Satan needs to step back.”

2 Responses to UPDATES On Sexual Abuse Case In California