The web site that published “‘Mentally Diseased'” and Political Correctness” is called Sheep and Goats. It appears to be written by one of Jehovah’s Witnesses. It’s meant to defend the Watchtower Society against critics who dislike the organization’s recent use of the term “mentally diseased” when describing those it deems to be apostates. Here are my reactions…and rebuttals…to the article. I will incorporate points I already made in my last article while I’m at it. 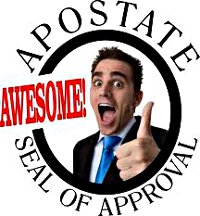 I heard about “Truth Be Told” some time ago in ex-Jehovah’s Witness circles. As an ex-Witness and geek, I’m always interested in documentaries about Jehovah’s Witnesses or–especially–ones about ex-Witnesses. I know many exxers like me were a bit disappointed that Knocking didn’t take a look at our side of the issues or really deal with things like disfellowshipping. (To be fair, it wasn’t trying to deal with those things. But people want what they want.)

Now, Gregorio Smith is giving us a voice with his upcoming documentary. As you’ll see at his site (or at the Wikipedia link) this isn’t his first time around the documentary block, which is actually pretty encouraging to me.

He describes Truth Be Told this way:

TRUTH BE TOLD is a feature length documentary that explores the lives of several individuals raised in the Jehovah’s Witnesses religion. The title of the film refers to the tendency by Jehovah’s Witnesses to regard their beliefs exclusively as ‘the truth’.

‘The documentary is not an indictment of religion but rather a retrospective. In a series of informal interviews, former Jehovah’s Witnesses discuss life experiences within the organization including the impact the religion had on their childhood and family, schooling, adolescence, and approaches to dating and marriage. The film also explores how being raised in that religion has shaped their spiritual beliefs and attitudes.’

The description certainly sounds encouraging, too.

1 and told him that I was looking forward to seeing the film. I also told him that I hope it will deal with both sides fairly, which I think will actually lend more weight to the plight of ex-Witnesses who have been cut off from their families thanks to being disfellowshipped. If the video is fair, then it will be much harder to dismiss. Gregorio is hoping to drum up all the support he can, including financial support.

There are some sample videos of interviews with ex-Witnesses at his site. If the documentary is something you want to see, please consider leaving him a donation through the “Support Now” button on the title bar at his web site. Hey, he’s got to get the cash somehow. We’re sure to be the ones most interested in the film, so why not help it get made?

I don’t know about you, but I’m wishing him the best of luck. I’ve been waiting to see something like this for some time. Maybe he’ll keep us upraised of his situation as the film progresses. I’ll post anything I learn about it right here on AGN.

In the meantime, here are some more clips of Gregorio’s previous films.

You’ve all heard about it. Here’s the actual video.

Personally, I’m not sure who to pick on here. The ultra-patriots kinda seem more like the bad guys than the Witness who “snuck” the TAZER in.

Need for discussions between hospitals and Jehovah’s Witness patients

I wonder what the Watchtower Society will make of this?

Proving that the Society isn’t broke by any means, though many Witnesses seem to think the organization is dirt poor.

This website exposes and disputes false charges made against Jehovah’s Witnesses. Find what you are looking for by clicking on the main categories or using the Search Box below.

A few articles that will surely go over well with exxers include:

Defend Jehovah’s Witnesses: How Accurate is The New World Translation?

In addition to the Twitter thing, I’m now on Facebook, Myspace (barely…don’t laugh), and Google+. Or is that Google Plus? (Yeah, I’m actually following Jeri Ryan. Hey, the thing nags you to add more people to your circle when you sign up and only lets you pick famous people. Waaah!)

Why not “friend” me…but please be careful. My friender is very sensitive. And no, I don’t know what that means.