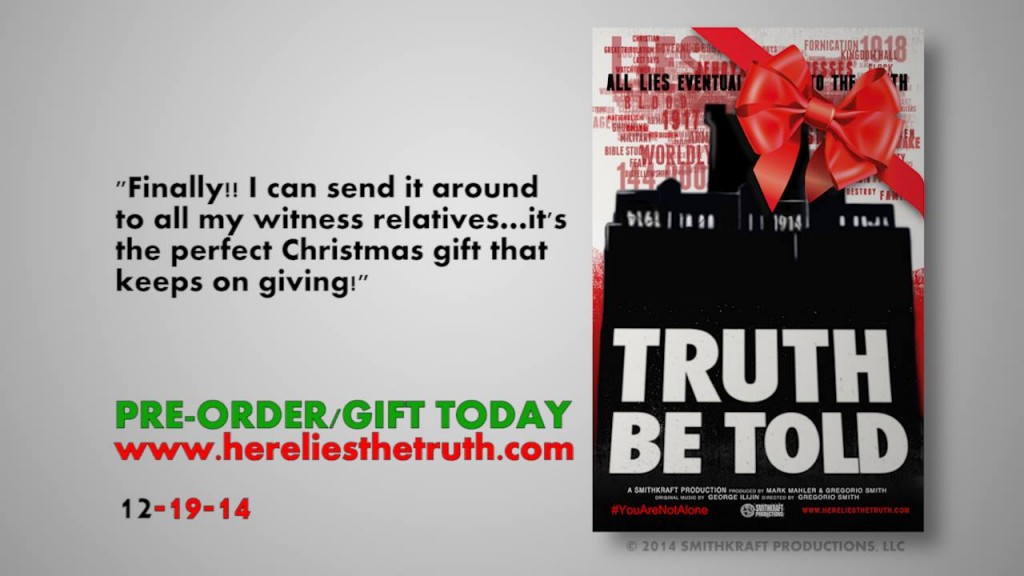 Hi everybody. Despite the prayers of your local Kingdom Halls, I’m not dead. 😛  I’m a busy college boy who hasn’t had time to write much or to fix all the quirks that were left in the aftermath of the big reboot here at AGN. Right now, you find me in the midst of Spring Break. And unlike your Spring Break, I’m here instead of getting drunk or making out with chicks.

This was the film’s second public showing in New York. A number of ex-Witnesses were there (wish I could have been one of them). But here’s the sweet part: 1) it took place less than two miles away from Bethel headquarters 2) it took place the day after the Memorial 3) the video shows Gregorio and others blanketing the general area near Bethel with flyers that promote the documentary.

On a related note, here’s a little bonus: Interview with filmmaker Gregorio Smith talks about “Truth be Told.”

The July 15 2013 Watchtower, which has been leaked weeks in advance of its scheduled release, offers more questions than answers regarding the Governing Body’s “new light”

That “new light” refers to the Body’s decision to declare themselves the Faithful and Discrete Slave.

VIDEO: Lord, Save us From Your Followers

Whether someone is Atheist, Agnostic, Muslim, Hindu, Jewish, – or yes, even Christian – all can identify at times with the cry, “Lord, Save Us from Your Followers!” Fed up with the divisive bumper sticker mentality overtaking America, director (and follower) Dan Merchant donned his Bumper Sticker Man suit and set out on the daring search for meaningful dialogue and the true face of faith.

Yes, it’s on Hulu…sorry. But if you have Netflix, you can actually watch it without the commercials!

Deliverance at Hand! is James Zimmerman’s account of growing up as a zealous Jehovah’s Witness in the Twin Cities area of Minnesota.

I heard about “Truth Be Told” some time ago in ex-Jehovah’s Witness circles. As an ex-Witness and geek, I’m always interested in documentaries about Jehovah’s Witnesses or–especially–ones about ex-Witnesses. I know many exxers like me were a bit disappointed that Knocking didn’t take a look at our side of the issues or really deal with things like disfellowshipping. (To be fair, it wasn’t trying to deal with those things. But people want what they want.)

Now, Gregorio Smith is giving us a voice with his upcoming documentary. As you’ll see at his site (or at the Wikipedia link) this isn’t his first time around the documentary block, which is actually pretty encouraging to me.

He describes Truth Be Told this way:

TRUTH BE TOLD is a feature length documentary that explores the lives of several individuals raised in the Jehovah’s Witnesses religion. The title of the film refers to the tendency by Jehovah’s Witnesses to regard their beliefs exclusively as ‘the truth’.

‘The documentary is not an indictment of religion but rather a retrospective. In a series of informal interviews, former Jehovah’s Witnesses discuss life experiences within the organization including the impact the religion had on their childhood and family, schooling, adolescence, and approaches to dating and marriage. The film also explores how being raised in that religion has shaped their spiritual beliefs and attitudes.’

The description certainly sounds encouraging, too.

1 and told him that I was looking forward to seeing the film. I also told him that I hope it will deal with both sides fairly, which I think will actually lend more weight to the plight of ex-Witnesses who have been cut off from their families thanks to being disfellowshipped. If the video is fair, then it will be much harder to dismiss. Gregorio is hoping to drum up all the support he can, including financial support.

There are some sample videos of interviews with ex-Witnesses at his site. If the documentary is something you want to see, please consider leaving him a donation through the “Support Now” button on the title bar at his web site. Hey, he’s got to get the cash somehow. We’re sure to be the ones most interested in the film, so why not help it get made?

I don’t know about you, but I’m wishing him the best of luck. I’ve been waiting to see something like this for some time. Maybe he’ll keep us upraised of his situation as the film progresses. I’ll post anything I learn about it right here on AGN.

In the meantime, here are some more clips of Gregorio’s previous films.