The Watchtower Tract and Bible Society has won Planning Board approval for a new world headquarters in a semi-rural section of town off Long Meadow Road.

I think it’s kinda funny that they got the name wrong. Because I’m easily amused, I guess.

Written by AAWA’s Richard Kelly. As always, be sure to check the comments.

In a video deposition taken in 2011 during a civil lawsuit, admitted serial pedophile Gonzalo Campos said he abused several children in his San Diego congregation from the early 1980’s through the mid 90’s.
“I did abuse him,” said Campos in the video. “I touched his private parts.”

An usher at a Jehovah’s Witnesses congregation in Sun Valley was charged Wednesday with sexually abusing four boys he met at the church.
Marcelo Lozano, 34, is expected to be arraigned Wednesday afternoon at Van Nuys Superior Court with nine felony counts…

Bradford Crown Court heard yesterday Capazzo, 41, who was formerly known as Andrew Collins, had been a member of the Jehovah’s Witness faith.
Prosecutor Sophie Drake said his behaviour had been brought to the attention of the elders at a Bradford place of worship and he was “disfellowed”. She said: “Although he was shunned by the congregation he was still allowed to attend meetings. At that time matters were not brought to the attention of the police.”

At the recent summer conventions of Jehovah’s Witnesses in Silkeborg and Herlufmagle, speakers likened lapsed members to a deadly virus, snakes and contaminated soil that should not be mixed with clean soil.
The rhetoric was so strong that the movement may have breached article 266b of the Danish Criminal Code, under which…

From Cedars at JW Survey:

Recorded at one of the 2013 “God’s Word Is Truth” District Conventions in California, the speaker instructs Witnesses to shun family members, even children, as an act of loyalty.

The followers, which are anything but cult-like, come from all walks of life and transgress many cultures. The Watchtower is published monthly in 209 languages. Locally, followers get together in Lyndhurst at their hall on Stuyvesant Avenue on Thursdays and Sundays for “meetings.” The hall caters to local Portuguese and Spanish speaking, as well as English, Jehovah Witnesses.

Anything but cult-like??? Someone needs to do their homework. Check the comments for more.

I’ve never seen a yellow Kingdom Hall in real life before. It just goes to show you that all Kingdom Halls are not alike.

If it’s hard for you to believe that our bad experiences with “the truth” really happened, then consider this: some ex-Witnesses suspect that you guys are the ones who are really lying to us. That’s because many of us had it so bad at our old Hall that we can’t believe you had it so good. 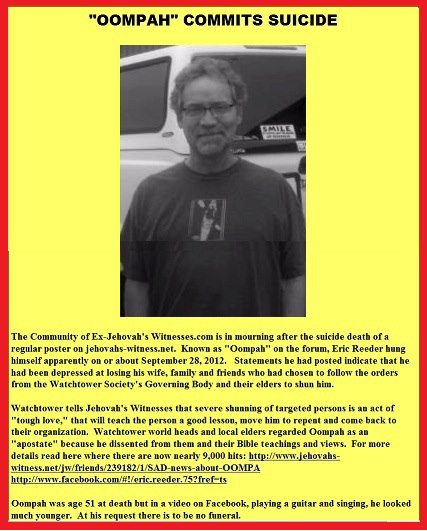