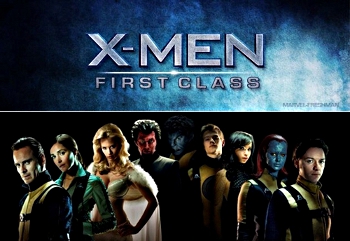 To me, this was a pretty uneven movie with plusses and minuses. So let me start with a warning. Right after the opening credits, the first scenes from the movie made me nervous. Had I wasted my cash or not?

First Class begins with Magneto as a boy in the concentration camps, which was a powerful moment from the first X-Men film. Only here, the camera pans away to a shot of Kevin Bacon looking on from his tower of Nazi doom. He was probably stroking an evil cat just out of sight, too. Well, it could have been worse.

Bacon, who plays Dr. Shmidt/Sebastian Shaw, gives us a full dose of his hilarious German accent. Then he tells young Eric (who will grow up to become Magneto) that while he may be working with the forces of evil, he really isn’t like all those bad old Nazis who captured Eric and even offers the kid a piece of chocolate. Eric asks for his mother instead, but his eyes stray longingly over that chocolate bar a little too long for my liking. I think we know what he wants more. Yeah, Hershey candy tastes that good.

Now Shaw wants Eric to move a coin with his magic mutant powers. Eric tries hard enough to make you laugh. He starts groping for it in the air the way I was groping in the movie theater for Emma Frost’s tits. But alas, the coin is as disobedient as Jones’ rack. Finally, Shaw brings Eric’s mother in and threatens to shoot her on the count of three if Eric can’t move the coin with his mind.

Eric tries to obey Shaw while his mother gently urges him on. You know she wanted to go, “I can’t love you anymore if I’m dead, Eric. Save mommy like a good boy or she’ll be very disappointed in you!”

Needless to say, Shaw shoots Eric’s mother … in the face. Ouch. Then Eric goes all Darth-Vader-at-the-end-of-Revenge-of-the-Sith on our asses by destroying the room and even killing the guards by smashing their helmets into their skulls, all while screaming “Neeeeeeeeeeiiiiiiiiiiiiiiiiiiiiiiiiiiinnnnnnn!” for like two minutes. Kid has some powerful lungs on him.

Then Shaw laughs and throws an arm over Eric’s shoulder. “We’re going to have a lot of fun together,” he promises. I guess he plans on using Eric’s powers to murder some puppies using their own dog tags later that day. Note that Eric doesn’t even try to kill Shaw. He just kills everyone else and destroys the room.

For me, the whole scene came off as comically bad. My wife and I began to shift uncomfortably in our seats. Oh bigger balls. It was my idea to see this turkey. My hopes for X-Men: First Class were making circuits around my toilet drain, let me tell ya.

Then we get another scene with Charles Xavier as a young lad. Only here, we see him sleeping in an opulent bed in his totally awesome mansion. As a telepath, he senses that someone has broken into his home and goes to investigate it personally. Now we don’t see his parents, so I’ll assume they have better things to do than check out a burglar at four in the morning. Note, this does not explain why he has an English accent despite being raised in New York, right here in the United States.

Anyway, he finds what looks like his mom raiding the fridge. She’s in a dress, despite the fact that it’s in the middle of the night. Which is weird. His mother is also long dead, so that’s even weirder. Charles doesn’t need to be a telepath to guess this isn’t really his mom. He points out the flaws in the woman’s plan without hardly batting an eye or running for his life. See? Charles clearly wants to die. Being evil, I say God speed.

Now this scene tells me one of three things:

Guess which theory I’m going with? But the movie never really seems to tell us which one it is. Damn them.

Cripes. It really looked like this was going to be an awful movie. Thanks, X-Men jerks!

But then, happy days are here again! The movie fast forwards into the sixties and we see them all as adults. Which is pretty sweet. Especially the Emma Frost in bra parts. Did I mention that yet? And then we see Eric, systematically chasing after Sebastian Shaw/Kevin Bacon on a bloody quest for sweet vengeance. Throughout the middle of the movie, it is Eric/Magneto’s story that is the most interesting. He’s pretty bad ass, and uses his powers well.

Of course, watching Xavier seduce every chick he meets with some stupid pickup line about genetic mutation was almost entertaining, too. My wife seemed to like it. Hmmm … why would that be? Oh, Mystique sometimes blows his chances to score, so we know she’s sweet on the guy. I would have banged the shapeshifter who can look like anybody, but not Charles. Dumb ass.

The hard thing about this idea is that Mystique likes Charles Xavier in a “check the box if you like me” kinda way (giggle) even though they never even spoke to one another in the previous movies. Hmmmm… I call retcon on that one, guys.

I won’t spoil anything else about the film for you. You do get a few cameos from actors in the previous movies, which is nifty. And we finally get to see some other, lesser known Marvel characters. Pay attention or you’ll miss them, kids.

Ultimately, I think X-Men: First Class is a good movie. It works well as an action film, though it does get a bit long at times. I would say that it’s well written, though the execution was mediocre in a few places too many. I still recommend it. Or look for the Rifftrax to come out after the movie arrives on DVD.

Oh, by the way. Emma Frost was hot.

P.P.S. January Jones didn’t give the best performance here. But her tits rocked. I hope they’re in the sequel and maybe win an Academy Award or something. Nice job.

She loses points for the hair, but that’s her hair. Her boobs don’t even speak to the hair. So it’s cool.