Review: “X-Men: Days of Future Past” 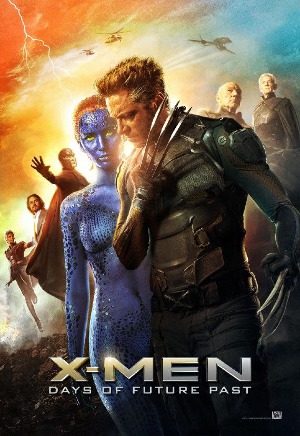 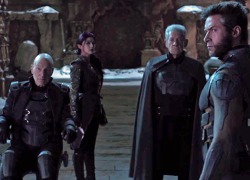 Not unlike The Avengers, geeks seem to be going crazy for this movie. Also not unlike The Avengers, I wasn’t that crazy for it, but thought it was a good movie all the same. You’ll hate me for saying this, but it probably should have been longer to develop Magneto’s character a lot more. He seems like more of a tool for the story this time around. There are also some issues that some people – including other reviewers – found confusing.

I’m about to explain the setup for the movie below, so if you hate spoilers, run away now.

The movie begins with a Terminator-style montage of how shitty-awful things have gotten since the Sentinels came online. As you may know from the trailers, Sentinels are designed to only attack people with the mutant gene. It turns out that some people have the gene who aren’t mutants, though they might have mutant children some day. So the Sentinels have begun targeting mutants and many normal humans alike. The future we see is a misty shit hole of doom and gloom. We are treated to a short battle between mutants and Sentinels, as revealed in a clip of the movie posted by the studio a while back. The mutants wear a beat down because the Sentinels rock.

But wait! Kitty Pryde … for reasons I can’t fathom … has the power to project people back into their younger bodies as well as walk through walls. She never had this ability in any of the comics I read, but OK movie. I’ll play along. 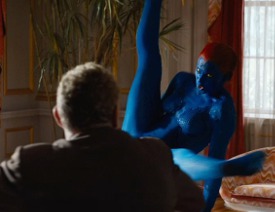 This is what it’s like to date a gymnast … when you’re the pommel horse. Be careful what you wish for!

This works a bit like body switching with those stones in the Stargate TV shows; it’s an active connection that can be broken. So projecting people into their past only works so long as she is actively using her power, and once she stops, the present will be reset in accord with the changes already made to the timeline. (Someone call Neil deGrasse Tyson on the movie’s physics. What do you mean someone already did? Oh.) Only the person who went back will remember things the way they were before history was changed.

This power comes at a price, however. It can damage a person’s brain if she sends them back too far. I’m not sure why. This is why Wolverine is chosen for the mission. His healing factor will allow him to survive going back to 19731. Cinema Sins will no doubt dub similar lines from Star Trek: First Contact over the bit where Xavier explains that this was a seminal year in mutant history. It was 1973 when Mystique killed the inventor of the Sentinels, inadvertently getting captured and experimented upon. Not to mention encouraging the government to fund the Sentinel program, which apparently began in the 70s even though we never hear about it in the first movie. 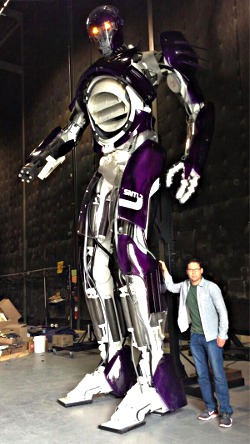 From there, hijinks ensue. If you’re a fan of Magneto, especially Magneto as portrayed in X-Men: First Class, then you will be saddened to learn that Magneto just doesn’t play that big a role in this movie. It’s more about Xavier’s personal problems and overcoming all the setbacks he’s suffered from the first movie.

One problem that many people seem to have with this movie’s continuity is how Xavier came back after X-Men 3. It actually ended with Xavier having telepathically transferred himself to his twin brother, who was in a coma. To understand this, you’d actually have to read about the fact that this guy was supposed to be Xavier’s twin elsewhere because, as far as I can recall, they don’t say it in the movie. (Which is kind of cheating, but I digress.) This doesn’t make a lot of sense for a variety of reasons, but if you’re willing to believe in people who can read minds, turn into steel, and control the weather … well, you know what I’m about to say. I’m more interested in how Magneto got his powers back, although there was a hint at the end of X-Men 3 that some hint of his former powers remained.

So go see X-Men: Days of Future Past. And make sure to watch out for the end credits sequence. It’s a hint about the next movie, but not much of one since the hint is already in the movie’s title. X-Men: Apocalypse.