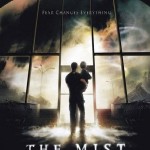 I have never read Stephen King’s book, The Mist. I have no idea how it compares with the movie version of The Mist or how Stephen King felt about the movie. But this I know: if the SciFi Channel made the book into one of it’s weekend crapfest movies, then the DVD I saw couldn’t have been any worse. In fact, the SciFi Channel version would probably have been funnier because the special effects would have been embarrassing. It’s sort of like comparing Battlefield Earth (the movie) with the Star Wars prequels. Any of the Star Wars prequels. Battlefield Earth was just as awful … yet it was also hil-ar-rious! You really owe it to yourself to dust that puppy off once every couple of years and watch it. I dare you not to start rolling on the floor at the first closeup shot of a Psychlo! Sadly, The Mist wasn’t as funny as Battlefield Earth. But it was definitely funnier than the Star Wars prequels. So if you’re looking for a plus side … well, there’s that. And the fact that I’m going to ruin the movie for you now so you don’t have to see it doesn’t hurt either.

You’ll be yawning through the first 20 minutes or so, so wait until you’ve hit the “Play” button to go make yourself a sandwich. In fact, you don’t even need to show up until at least 25 minutes in. The opening is all about how a tree fell on some dude’s house and how his neighbor is an inconsiderate jerk. Note that the star is actually the Punisher from a much better movie. Poor sap. Anyway, they end up going to the store together because … ::shrugs:: … and then the big and scary mist rolls in. At this point, my brain is all like, “Look man, nothing’s happened for nearly half-an-hour. It’s gonna be awful! Why are we watching this??”

More time passes until the Punisher wanders into the store room. Oh, the suspense. He hears something scary and tells everybody, but the hicks won’t listen. So they nominate some smart-mouth kid to go out and clear the exhaust pipe on the generator so they can get the lights going again. (Kid, ya shoulda wondered why they didn’t offer to go out themselves instead of sending you. Dunce.) Soon as the garage door goes up, the kid gets torn apart by an overgrown tentacle thingy. Actually, that part of the movie was all right. I’m all for smart-mouth kids gettin’ eaten. The Punisher tried to warn him, but nooo, he had to prove he was a man. I would have dared the little jerk to go out and get eaten, but if that’s how the Punisher wants to play it, then fine. At least there’s one less annoying person in the cast at this point. That works for everybody. In a flick like this, the more death the merrier I always say.

After two days of this, the group disintegrates into an unruly mob of uber-Christians out for a sacrifice. No kidding. That’s all it takes. So The Mist turns into some sort of weirdo fundamentalist-belief versus moderate-belief argument that doesn’t really work. At all. I mean, come on. This ain’t Shakespeare, people. It’s The Mist.

Finally, about a handful of normal people make a break for it. But only after a philosophical debate with some “thunder and brimstone” spewing uber-fundy barring the way. She insists that God wants them to stay in the grocery store and that none of them should leave. One of the employees just shoots her ass (hurray!) and the group of not-stupid people high tails it.

Then things get sorta weird.

ALERT! I am about to spoil the end of this awful film. If you plan on renting the DVD, you might not want to read any further. Or you might want to get your head examined. Either way, you’ve been warned.

So the surviving escapees get into a car and drive. They keep hoping they’ll outrun the mist, which – we now know – is from another reality that’s spilling into their own. So they drive and drive … until their gas tank hits empty. They have no food. No water. Nothing at all except each other … and a gun. There’s five of them, but only four bullets. And one of the survivors is the Punisher’s little brat.

What does he do?

The camera goes wide. We see four flashes of light. Then we see the Punisher. Alone. Yep, he shot everybody, even Punisher junior. (!!!) So he goes outside and waits for the bugs to get him. Only that’s when the mist clears and … are ya ready for it? … the army rolls up as they begin exterminating the bugs and clearing away the mist! So he shot everybody in his group – including the (fairly) hot chick and his own son – about 5 seconds too early! Aw, if only he had waited.

Oops. Life’s tough sometimes, kids. Deal with it. Thank you for watching this awful movie.

But it gets even better. As the military vehicles start rolling past, he sees the fanatics from the grocery store in one of the trucks. So it was just like the crazy fundy-lady said. They shoulda stayed at the store. Apparently it was all part of God’s plan. (?????)

No kidding. That’s the end of the flick.

Can you imagine being one of the soldiers who has to go over and check out the Punisher? “Hey there citizen, everything’s under control now. So just get back in your vehicle and … whoa, shit! How many people did you shoot in the face? Oh, my bad. Man, this is awkward. So you thought we had lost and you’d given up all hope, eh? You an atheist? That your kid? You at least bang that chick before you killed her? No?!? Well, I guess you don’t feel like talking much just now. Uh, well … as you were then.”

This ending was awesome. In the same sense that Battlefield Earth was awesome. This movie was so bad that the badness looped itself. I almost feel bad ruining that part for you. But you’d have to get through the previous hour-and-a-half to see it. Not worth it. I just hope the book sucked less than the movie.

It almost had to. I mean, even a 15,000 page King novel couldn’t contain that much awfulness.

The Atheist Geek is a former Jehovah's Witness turned secular humanist. He's a lifelong sci-fi geek and a writer wannabe.
View all posts by The Atheist Geek →
Tagged movies, review, scifi, The Mist. Bookmark the permalink.