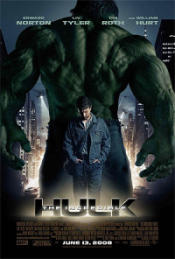 I did. And I didn’t regret it.

Don’t get me wrong. This isn’t X-Men or Iron Man. It’s pretty much a straight on action movie, but it beats the older movie’s attempt at being “artsy” and “different,” which is the very thing some fans of the old movie liked. To be honest, I would have preferred a movie with a little more to it than “Hulk smash!” and “Liv Tyler very bangable.” (That last one was my line. It’s just how I speak in real life. Sorry.) But a solid action flick is better than a smarter movie that’s been badly done almost any day.

Edward Norton gives a solid performance as Bruce Banner in this film. William Hurt practically is General Ross, in my opinion. And, as already noted, Liv Tyler is hot. But I thought her Betty Ross was so supportive of Banner that it bordered on an old movie stereotype most of the time. Then, at long last, there’s Hulk’s arch-enemy, Abomination, who challenges The Incredible Hulk for the championship belt near the end of the film.

I have one thing to say about Abomination: he has no “thing.” That, ladies and gentlemen, is almost as disturbing to the Atheist Geek as the fact that he has no pants. Why, movie? Just tell me why? (Sadly, my graphic to the left doesn’t make it all that clear. Guess Marvel didn’t bother posting explicit “Hulk-shlong” photos for bloggers like me.) I suppose it’s also possible that Abomination has internal genitalia, but who really wants to think about it that much? Well, you go there if you want to. I’ll be waiting in the other room with my life-sized Liv Tyler doll and I do not want to be disturbed. Ya know what I mean?

There are also a couple of guest appearances in the film, including your standard issue walk-on by Stan Lee. Be on the look out. And unlike Iron Man, you can actually leave when the credits start to roll. The little surprise at the end appeared before the credits on this one. It also shows that someone at Marvel is pretty dang smart, cause the surprise will have you wondering what’s coming next. (Heh heh.) Very cool.

You go Marvel. ’bout time you came into your own on the big screen. I proudly recommend The Incredible Hulk to all of my fellow sci-fi geeks.

6 Responses to Review: The Incredible Hulk!