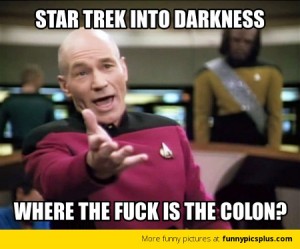 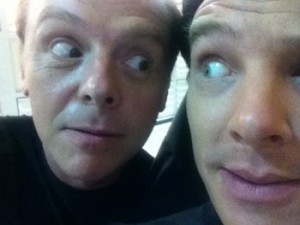 Star Trek Into Darkness feels like the previous Star Trek movie. Overall, that’s a good thing. The closest we get to a yawn-inducing conference scene is when Scotty gets drunk at a bar while talking to Kirk.

Like most J.J. Abrams movies, this film was more style than substance. IO9 understandably referred to it as “Star Trek into Dumbness.” Like the previous movie, even a cursory glance at the story reveals a lot of glaring plot holes, conveniences, and inconsistencies that strain our suspension of disbelief. Below, I’ll point out some of the most obvious ones.

1. Kirk is demoted to First Officer for violating the Prime Directive and Admiral Pike is given command of the Enterprise … again. Pike gets killed after five minutes of screen time, putting Kirk back in the captain’s chair. What was the point of having Kirk demoted? Maybe the writers were taking a stab at character development by teaching Kirk he’s not above the rules, but I felt nothing. In storytelling, less is more, people.

Here we see Spock helping Khan with his dandruff problem.

2. Admiral Marcus finds Khan floating somewhere in outer space and thaws him out of cryosleep. Let’s pretend I buy that. Then Marcus gives this 300-year-old evil genius access to modern science and a frigging laboratory to create a new starship that’s way more advanced than anything else Starfleet has. Let’s pretend that doesn’t also sound stupid so we can get to the real stupid.

How does Admiral Marcus keep anyone from finding out about the ship or about Khan and his fellow supermen? Wouldn’t Khan need special clearance to work in an experimental military facility where they build starships? Or did Marcus keep Khan in his basement and pretend he thought up all these advances himself? And where the hell did Marcus hide a starship that was twice the size of the Enterprise? His backyard?

I know space is huge, but come on, this thing would need to be docked to a space station to keep all its lights blinking and warp engines breaking. You could say there’s a conspiracy within Starfleet that goes beyond Admiral Marcus, but if that were true, why would he bother destroying the Enterprise to keep its crew from informing Starfleet?

3. Khan supposedly designed some new photon torpedoes for Starfleet. At first, I thought they might be quantum torpedoes. Instead, they were simply hiding places for the rest of Khan’s evil henchmen. Um, how does that work? Did Khan build all 72 torpedoes himself so no one would find out he was hiding human beings and their cryotubes inside them? If he could do that, why didn’t Khan just wake the supermen and smuggle them out instead? When Khan explained this to Kirk, he told the captain that Admiral Marcus found out about his plan. No shit. It was a stupid plan. Does being genetically enhanced mean that you’re really a dipshit and everyone has to pretend you’re super smart? 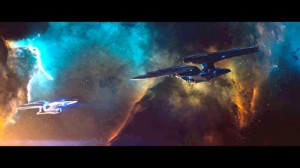 The stupid doesn’t end there. Why would Marcus have Kirk fire those torpedoes at Khan instead of just sending Khan a Youtube video of the supermen being executed to make his point? Maybe Marcus was hoping that Kirk would find out so he could justify killing Kirk? But wait, if that was the case, why not ambush him and shoot him in the face on some alien planet when no one was looking? If no one knew about Khan, wouldn’t that be the safest, easiest way to handle it?

Except for his daughter, who figured it all out on her own. Hotness = smart, I guess. I could go on, but the more I think about it, the more I want to send this movie to a creative writing class to learn from its many horrifying mistakes. I just don’t have that kind of money right now. Sorry movie.

4. Khan wasn’t a skinny British guy in the TV show or in The Wrath of Khan. Carol Marcus wasn’t British in The Wrath of Khan either. Wait, her dad wasn’t even British in this movie! So why does she have the accent? Even if her mother was British, would she really be that British? I mean, what the hell, movie?

Still, I will allow it because Alice Eve looks pretty hot in the skimpy underwear. And her accent makes me extra tingly. Well played, Mr. Abrams, using my boner against me like that. You win this round!1

5. Before moving on to the big fight scene, I question the wisdom of having Spock scream, “Khaaaaaaaaaaaaaaan!” for any reason. The movie became a parody of Star Trek II: The Wrath of Khan at this point. I didn’t feel like Kirk and Spock were close enough in this altered universe to warrant that reaction. It would have been better if Spock went all deadly-quiet, his rage simmering just beneath the surface as he marched onto the transporter pad to go after Khan, but having Spock shout out Khan’s name was in bad taste. Also, if they could beam down Uhura to give Spock a message during the fight, why couldn’t they just beam Khan up to the ship to get his blood? There clearly wasn’t anything wrong with the transporter then.

Since Spock is a Vulcan, he and Khan should be about the same strength. So why was Khan trying to crush Spock’s skull in with his bare hands? And why was it working? Don’t tell me it wasn’t working. We could hear Spock’s bones popping! Are Vulcan skulls made from peanut shells or something?

6. I thought the Klingon home world was on Quo’nos, not Kronos. Oh, just go to hell, movie!

Here’s a few tidbits from other websites about Star Trek Into Darkness you might find interesting.

The Braver, Better Movie That Star Trek Into Darkness Could Have Been