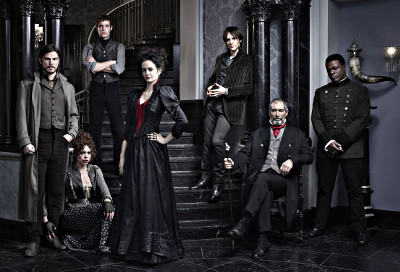 Malcolm Murray, Mina’s father and the leader of the monster hunters, feels a drive for success and fame, a drive that has already cost him dearly. His son died trying to earn Malcolm’s approval. His daughter is in the clutches of some Egyptian god that apparently has ties to Dracula – as in, Bram Stoker’s Dracula. Even as the story progresses, Malcolm begins to understand that he may not be able to save his daughter despite his knack for getting what he wants.

Will he do what’s necessary to set Mina free?

Vanessa Ives (Eva Green! Hurray!) begins the series as a psychic who has partnered with Malcolm for reasons we don’t understand at first. We only know that she is committed to finding Mina.

Soon, we learn that Vanessa has a literal demon inside of her, a demon that is trying to possess her. It is this demon that gives her the psychic power she wields. She wants to be free of this monster, but she is in possession of it as much as it wants to possess her. Without it, she is nothing more than an ordinary Victorian woman. With it, she can help save Mina and possibly many others. I suspect that the demon also gives her the chance to indulge her own darkness from time to time.

As you will see, Vanessa’s demons are as mental as they are literal. Is the demon really there, or is it just a figment of her tortured psyche?

Victor Frankenstein is in the background staring at this poor guy’s head.

Also like Malcolm, this drive has led him to make mistakes and even shirk his responsibility to his own children. By children, I mean the monsters he has created and abandoned, of course.

Like all the heroes, Frankenstein is a complex personality capable of things both good and bad. He consults with the Abraham Van Helsing, a character I hope we’ll see more of, too.

This is not Ethan Chandler. It’s a woman. No, really.

Ethan Chandler is an American and a bit of a cowboy, not to mention a sharpshooter who is basically working as hired muscle for Malcolm.

His demons are buried a little deeper than most and we are told that there’s more to him than meets the eye. His girl friend, played by that man-faced chick from the first season of Doctor Who, has tuberculosis and he is desperate to save her any way he can.

Ethan’s father has men looking for him, but Ethan won’t be going back to the states without a grisly fight.

Caliban is basically the first monster that Frankenstein created; think of him as the creature from Mary Shelley’s novel. Caliban is tormented by his unnatural appearance and the fear he causes in others. But his real problem lies within. Just like the original creature in the novel, he is capable of great compassion and great anger. He is super strong but also pitiful and desperately alone.

I hope he’ll find his way in the mix of monster hunters at some point. Of course, the others don’t know that he exists or that Frankenstein knows how to create monsters of his own. I suspect they’ll figure it out during the second season. 🙂

There are other, less prominent characters that I hope will get more screen time in the second season. I’d really like to know more about Sembene, for instance. Dorian Gray is also a noteworthy character, but he isn’t central to the team in season one. I’m really hoping Doctor Jekyll will make an appearance in a later season as well. What Victorian era character would be better for the show than him?

How the hell did this guy luck into a handful of Eva Green boobage?!?

So I highly recommend Penny Dreadful, although some might find it an acquired taste. If you want a TV show that’s mostly about monsters punching each other and vampires getting staked, there is some of that here, but probably not enough to keep you interested. If you want a complex drama about the inner demons of its central characters, then this one is for you. It’s been renewed for a second season. I can’t wait. 🙂 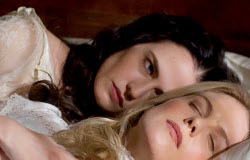 Watch Penny Dreadful or these two won’t make out!

UPDATE: I’ve begun rewatching the first season of the show. I’m seeing everything with new eyes this time around. There are threads throughout Penny Dreadful that you might miss the first time, especially if – like me – you didn’t quite get it at first. I’d love to go into detail, but that would ruin it for you.

There are a lot of questions raised in the first episode. Let’s just say that most, if not all of them, will be answered by the end. 🙂

I also had an interesting exchange with someone over at Den of Geek who apparently thought the show was sexist and racist and that this made it pretty awful. Or something. A rant ensued. Good times.