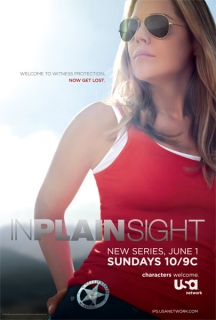 After some problems with my satellite dish, I finally got to see In Plain Site today on the USA Network. I’ll admit that it wasn’t quite as good as Burn Notice, but it was a lot better than Monk in my opinion. Burn Notice is a bit edgier, but In Plain Site has Mary McCormack’s boobs. So … there’s that. The first episode also had more in the way of family drama than Burn Notice. Note that — for me — Burn Notice has it just about right. These two factors sort of cancel each other out if you’re me, which you probably aren’t. Personally, I’m hoping for a crossover some day in the future. Kinda like that time when Magnum P.I. met Simon and Simon back in the 80s.

As Marshal Mary Shannon, Mary McCormack is fiesty and smart. Like many USA characters, she’s hard nosed and tough on the outside, but all caramel on the inside. Her partner, Marshal Marshal, (no joke) reminds me a little of the guy from NBC’s Life. Word on the net has it that NBC might “borrow” In Plain Sight for it’s line up and show the program on both networks. Must be nice to have a few other TV networks in your pocket than your own.

Mary isn’t just a U.S. Marshal. She has a family filled with problems. Like her mother, who’s over protective of her younger sister. Note that her younger sister does drugs and likes to steal cars, so she sounds like fun. This includes cars owned by Mary’s “sort of” boyfriend. Note that Mary doesn’t like to get too close to anyone, so her opinion differs from his on just how far the relationship goes.

One thing I noticed about the series is the part where one of Mary’s charges (a witness under her protection) got a deal where the government would pay for her new boobs. I didn’t just notice this cause I look the boobies. It reminds me of a story right out of WITSEC, a book about the U.S. Marshal program. (WITSEC is the actual name of the witness protrection program.) One of the creators of WITSEC claimed that this really happened on a case he was involved in. I suspect the writers of the show have read the book. Good for them.

I’m looking forward to seeing more of In Plain Site. Looks like it comes on tonight. I’ll be watching. You probably should too.