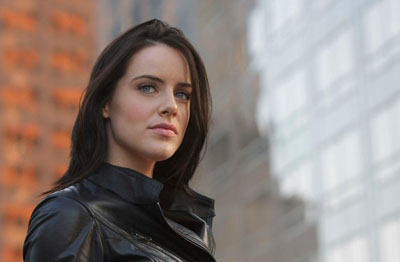 Despite our impending marriage (still waiting to hear back from Michelle Ryan as noted in the bottom left of my old web site) I have to mark the pilot for Bionic Woman as good, but not super. I still think the show has a lot of potential and that further episodes will make me totally subservient to Michelle’s talent as well as her hotness. The thing is that Bionic Woman’s first episode was a little slow as many TV pilots tend to be. I also had a little trouble swallowing the idea that she was made bionic just ’cause her boyfriend wanted to give her implants to save her life. (Most guys think about doing this to their girlfriends, but for different reasons) I get the feeling that Bionic Woman would have been better served by a two hour premier that would have let them go nuts instead of just the one hour deal they gave us. But, you take what you can get.

The gist of it is that Jaime Sommers (played by mega hotty Michell Ryan) is going out with a super-smart guy who, it turns out, works at a super secret base where they make bionic hotties. Sarah Corvus, the first bionic woman, hits his car with a truck because her boyfriend told her to. (Which is kinda sweet, in a way) Jaime just happened to be inside the car when it was hurled across the street and wrapped around a telephone pole. I’m not sure, but I’m guessing that might have hurt.


Jaime awakes to discover that she’s been given implants. No, not those kind of implants. (I’m looking at you, Seven of Nine

) I mean two bionic legs, a bionic right arm, and a cybernetic ear and eye. She also has “anthrocites” jammed into her bloodstream, so she heals super quick like Wolverine from the X-Men

. The upshot of all this is that she can crush your hips like a f**king grape when you make love to her.

Bottom line: it was good enough to keep me watching even if Michelle Ryan wasn’t the star. Did I mention that she’s hot and British? Oh, it’s true. And – holy crap – she can act! She was in another show I reviewed a while ago, Jekyll. She did a great job in both shows.

Katee Sackhoff plays Jaime’s kinkier, more twisted archenemy, who is physically more powerful than she is (because she has more bionic parts), but who is also an emotional wreck. Katee, as Sarah Corvus, is basically that angry chick you know from work who wears too much eye shadow and hates everybody, except her boyfriend, who actually uses her and treats her like crap. She has dependency issues, making her unstable and less powerful when it comes to living her life than Jaime. In a way, Corvus reminds me a little of the Jaime Sommers double from the original series, with Lindsey Wagner.

Right now, I would say that Bionic Woman is about woman power at it’s core, but in a different way than Buffy The Vampire Slayer

(my favorite “girl power” series to date) or Charmed

(which is more about the hair twirling, bubble-gum popping sort of girl power that I would have thought a little insulting to women) or even Xena Warrior Princess

(if not for the plastic boob armor, Xena would have easily been a man! … or at least a good co-star in the next Aliens movie). Man, I really hated Xena. To each their own, I guess.

Note that Bionic Woman has its share of excellent Battlestar Galactica alumni, which can’t possibly hurt. David Eick, who co-producers Galactica, also produces Bionic Woman. Katee Sackhoff, who is considerably hotter as Sarah Corvus, also plays Starbuck. (Yes, I am a Sackhoff Starbuck fan!) We also have Aaron Douglas who plays Galen Tyrol on Galactica. Miguel Ferrer also rounds out the cast, though he’s not on Galactica. Shame, really.

Anyway, updates to this review will follow if I become more enamored with the show … or less, for that matter.

And now, for a steaming face full of Michelle Ryan hotness – behold!

NOTE: This was before I knew what the hell I was doing, so try hovering your mouse over the pictures for comments. 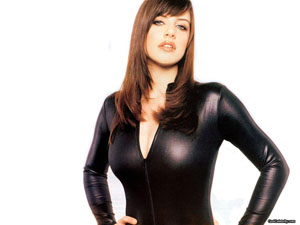