From The AWAKE! Magazine: A WORLD WITHOUT RELIGION-AN IMPROVEMENT?

Yep, my (non)award winning series on the November issue of the AWAKE! magazine continues. This time, the Watchtower Society has gone into grudge match mode by throwing a world without religion into the ring with one that has religion. Which side will be the victor in their article? I bet it’ll be a surprise! OK, seriously, at least they didn’t use Hitler as an example of an atheist regime in action (the Nazis weren’t atheists). So they did a better job than I was expecting right there. All the AWAKE! magazine gives us is a picture of Hitler shaking hands with a Catholic and a subtitle about how awful other religions were for supporting (cowering before, really) the Nazis. That’s pretty mild when you consider how the Watchtower Society goes after other faiths, especially Catholics. Hey, maybe this will be a step up!

In my last post, I wondered if the Society would bother reaching out to atheists, or if the whole magazine would be about atheist bashing to win over members of Christendom1 at our expense. In the past, their condemnations of atheists have been fairly mild when compared to how some groups deal with us. Maybe the Watchtower Society recognizes how many ex-Witnesses have become atheists and doesn’t want to drive us farther away? Or maybe they have something else in mind.

Whatever the case, let’s see what’s in store for us in this AWAKE! article. 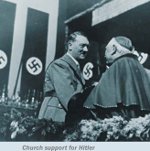 As often happens, the article starts with the Society separating itself from other religious groups in subtle ways. It says that the new atheists envision a world where there’s “no suicide bombers, no religious wars, and no televangelists ﬂeecing their ﬂocks.” The first two certainly have nothing to do with the Watchtower Society. The last one about televangelists … well, even the angriest ex-Witness has to admit that they don’t ask for donations on TV.2 This is their way of basically saying they’re not like those other religious groups. Then the paragraph asks if a vision of a world without suicide bombers, religious wars, and TV evangelists would appeal to the reader.3

The article asks us to consider real world atheist regimes as examples of what an atheist society might be like. Naturally, it offers us the (not the Nazis!) Kmer Rouge of Cambodia and Stalin’s Soviet Russia. Thanks for that, AWAKE! article. Still, to their credit, I think their main point was that secularism doesn’t guarantee a society which is free of evil nut jobs who want to kill anyone they see. They aren’t necessarily saying that this is how it would go if we left religion behind. (At least they aren’t saying here.) Compared with the accusations others have made about us over the years, this is a pretty mild statement. It’s not great, but it’s not terrible. Heck, I’d even admit that it’s true to some extent. (Feel free to submit why you don’t think it’s true in the comments.)

Before you write that hate mail, let me tell you what I really mean when I say it’s true.

First, it seems that the human race has a tendency to favor some level of religious belief. So whenever you throw a heap of random people into a room … or ask them to form a country … most of them will probably be believers. Unless someone decides to build a secular equivalent of Israel, inviting atheists and only atheists to move there, I don’t think you’ll ever get a state that truly represents what a secular humanist nation could do. Even then, you know some evangelists will slip through the cracks so they can infiltrate it and start handing out Watchtower magazines. As it is, there just aren’t any good examples of atheist nations out there because this has never been done. Using whacked out socialists is the best we have in the way of real world examples. I don’t see godlessness as the root cause of socialist problems, but we surely can say that throwing out religion doesn’t solve everything by itself. I don’t think anyone ever said that throwing out religion would solve everything, of course. I can still acknowledge that the other part is true, though.

Second, it seems that the creators of socialism felt that religion was being used to control and exploit the workers in other forms of government. So they got rid of it. In practice, real socialist governments seem to have replaced devotion to a god or gods with devotion to the state. Everything the people do is supposedly in service to their country, and their country provides them with the necessities of life for their services in return. (Not that it works very well in practice, but that’s how it’s supposed to work.) So they aren’t atheists because they believe in atheism as a “real” atheist might. I’m sure someone disagrees with me there. Feel free to tell me how wrong I am and why in the comments.

Third, declaring your evil socialist empire to be atheistic doesn’t mean that there are no believers in your evil socialist empire. There almost certainly are. 4 They just have to keep their beliefs hidden. So I’m not sure how truly secular such states really are. These countries certainly don’t represent secular values as I see them. Heck, Star Trek 5 provides us a better model than they do. Too bad Star Trek isn’t real, but you get my point. Star Trek geeks can feel free to tell me how wrong I am about that in the comments, too.

From here, the article might be reaching out to atheists a little. If that’s really the case, it does so in the usual, clumsy way that fundamentalist so often use. I think it’s more likely that the authors are trying to make atheist appear childish in the eyes of other fundamentalists by pointing out the obvious and implying we missed it.

Few would deny that religion has caused much suﬀering. But is God at fault? No! He is no more at fault than a car manufacturer would be for an accident caused by a driver using a cell phone.

See, my atheist brethren? We need to stop blaming God for all that’s bad in the world! Wait. How do you blame this on someone who doesn’t exist, again? Oh,we atheists are really just closet believers deep down inside, only we don’t want to admit it. I guess we’re shunning God by pretending he isn’t up there or something like that. Maybe that’s the only way we can get back at him for not giving us that pony for Christmas when we were in the 7th grade. Oh brother. Guys, seriously, we’re rolling our eyes at you on this one.

Next, the Society begins the hard sell by sneaking in a bit about true worship (theirs) and false religion (everybody else’s) and how false religion contributes to moral ambiguity. As you can imagine, the article totally goes down hill from there.

Might atheism contribute to the same moral ambiguity or confusion? ‘No God’ means no accountability to a divine authority, as well as “no objective values which we are obligated to respect,” says law professor Phillip Johnson. Morality thus becomes relative, with each person determining his own standards—if he chooses to have any. No doubt such thinking makes atheism an appealing philosophy for some people.—Psalm 14:1.

Note that the Society refers to Phillip Johnson as a law professor and nothing more, as if he’s just some random dude who’s smart enough to have earned himself a law degree. In fact, Phillip Johnson is one of the founders of the Intelligent Design movement. Yeah, I’m sure he just loves those pro-evolution atheists. Totally objective authority figure, there.6

Ever wonder why in the world the Society would quote someone like Johnson, especially without telling us that they’re less than objective or less than experts on the topic at hand? He’s not an expert on philosophy or anything like that. If this was an article comparing Intelligent Design to evolutionary theory, it would be appropriate to quote Johnson for the I.D. movement. But in comparing atheist society’s to religious ones? In this context, it just comes off as needlessly underhanded somehow. So why bother?

Honestly, I don’t think it matters who they quoted. It’s more about emotion than facts. Putting that name and title in there makes you feel like the article’s opinion must be true. Don’t see what I mean? Try reading it again, only without the reference to Johnson or the fact that he’s a law professor. I think you’ll find that the feeling of authority is somehow diminished.

Might atheism contribute to the same moral ambiguity or confusion? ‘No God’ means no accountability to a divine authority, as well as no objective values which we are obligated to respect. Morality thus becomes relative, with each person determining his own standards—if he chooses to have any. No doubt such thinking makes atheism an appealing philosophy for some people.—Psalm 14:1.

As I said in my last article, making you feel whatever they need you to feel is what most of the Society’s writings are truly about. If it feels true, many people will simply accept that it is true.

Another thing–did I mention that the Society just accused atheists of being amoral to our faces in that last paragraph I quoted? Hmm… Thanks for that, AWAKE! authors. Did it ever occur to any of them that atheists might have a moral compass too? We’re people. Just like Jehovah’s Witnesses are people. Sigh. Oh, why bother.

Finally, the AWAKE! tries to scare us into believing that Armageddon’s coming and basically tells us to look forward to the New System of Things. It doesn’t even bother to warn us about the next article, entitled “I WAS RAISED AN ATHEIST.” Big surprise, eh? Come on, you knew they were gonna role out another ex-atheist, didn’t you?

Gee, I wonder how he’s gonna compare life as an atheist with life as a believer? One can only guess!

13 Responses to From The AWAKE! Magazine: A WORLD WITHOUT RELIGION-AN IMPROVEMENT?