According to Harold Camping, the world will end on May 21st. Of course, Harold Camping’s argument is as irrefutable as any given by … uh … any totally random religious organization I might choose to mention. I’m sure cars are being overturned and cats are being set on fire in your front yard as you read this, so you might want to get a head start on hauling ass. Not that it matters. Cuz Jesus is gonna git ya.

Personally, I’m just hoping to get laid by someone with fully functioning lady parts by then. That almost never happens even on a good day. Dammit. So I’ll shower for the big event. You do whatever the hell you want.

Well, at least it wasn’t an elder who made the prediction. Maybe I can avoid the parade of in-laws waving signs about how right they were on my front step after all. That’s why I made sure to buy a home where the front step is so small. Only four of them can gather there at a time without falling off.

There are land mines too. That’s why I don’t mow my grass. I have a slip of paper from the state that actually says it’s OK. How sweet is that? Keeps the kids off, too. Mostly. I still have plenty of mines left.

I just had my gallbladder yanked out like a grape off a vine last weekend. Ow. Jesus, couldn’t this have waited until I was on a real vacation or something? I’m just now able to move around without the help of 4 nurses and an ice cream cone for motivation.1 Thanks a helluva lot, Jesus. All knowing and wise? More like all knowing and inconsiderate if you ask me. Guess everything revolves around him and his precious apocalypse. No wonder I’m an atheist. Yeah, I said it.

I suppose no one will be alive to read the end of this post. Too bad. Or will they?

OK, you know I’m full of it. Here is a video of the old guy talking about how Jesus is gonna blow the shit out of us. Go there on May 22nd so you can point at him and laugh. Feel free to sound off so we know you’re still rocking the planet.

Seriously, Harold, everyone knows the world will end in 2012. The Mayans said so. And they were never wrong about anything. That’s why they defeated the conquistadors and rule all the Americas to this day, right? Beat that logic smarty pants. Thought so. 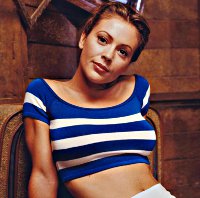 Someone clone her. Now. 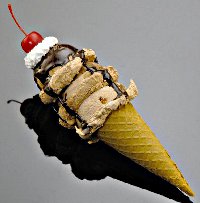 I liked it better before they dropped it on the linoleum floor, dammit!

“What worries you, masters you.”
P.S. One of these things better love me soon. I’m betting on the ice cream cone. Curse you, cruel world!

One Response to Doomsday, May 21st–So Long Suckers!