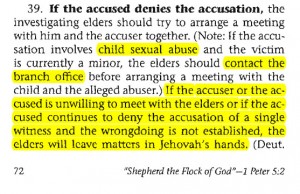 I’ve never seen a yellow Kingdom Hall in real life before. It just goes to show you that all Kingdom Halls are not alike.

If it’s hard for you to believe that our bad experiences with “the truth” really happened, then consider this: some ex-Witnesses suspect that you guys are the ones who are really lying to us. That’s because many of us had it so bad at our old Hall that we can’t believe you had it so good.