The link above takes you to a YouTube playlist that includes videos from Australia regarding their recent (and televised!) investigation into more than a 1000 cases of unreported sexual abuse of children.

For those who haven’t already heard, it sounds like sisters won’t be involved in meetings at all. They barely had anything to do before.

A dispute between an average Jehovah’s Witness and an elder. It pretty much goes down like many of us would expect. It’s a tiny bit Jerry Springer.

A local father who wishes to remain anonymous sent Action News Jax a copy of a letter sent to his family’s church.

The letter read in part: “Sorry about your loss. I read about it from the obituary.”

Jehovah’s Witness literature was attached to the letter.

Jehovah’s Witness grandparents ordered to keep faith to themselves

The couple lost their bid for unsupervised access to the girl because they insisted on taking her to worship at their faith’s Kingdom Hall despite the repeated objections of the child’s mother.

I wish the courts would do the same for my in-laws… Sorry. But also, wow.

‘Abused by my brother, then shunned by my Jehovah’s Witnesses family after I went to police’

Louise Palmer says parents sided with evil Richard Davenport over her, while church offered only prayers and urged her not to go to police

I think the flaws in policies like the two-person rule and telling Witnesses they can’t take accusations to the police without elder permission (elders aren’t cops, though some of them think they are…) should be really obvious by now.

The title pretty much says it all.

Many seem to think it’s the internet. I suspect it’s at least partially a cultural issue as other religions tend to dominate in Japan. What do you think?

Very cool. 🙂 Big shout out to everyone who participated!

Betrayed and exploited: Dismissed ‘special pioneer’ lashes out against downsizing

This website recently reported growing resentment among bethelites over the constant downsizing that’s taking place as the Governing Body hoards its dwindling resources in order to complete the Warwick project.

There’s also a story about the issues that prompted the lashing out.

Still think the Watchtower Society doesn’t have a pedophile problem?

The Tight Pants Rule: Wearing “disturbing” clothing gets you banned from preaching

Control issues. Yeah. They have them.

Go online and look up “Jehovah’s Witnesses and child molestation” and you’ll find site after site that shows their horrific track record in how they handle such abuse within their religion. You can browse this site alone, under the Pedophilia category or JW Victims in the News, and see civil case after civil case being filed, along with cases of active, approved members of their congregations actually serving jail time for the rape and molestation of little children.

I remain steadfast in my believe that the Watchtower Society is getting more obviously crazier with each passing year.

Dear LGBT-Community, I apologize for having been a homophobic Jehovah’s Witness Jerk

Dear LGBT-Community, I was a homophobic assh*le for two-thirds of my life. I am 33 now and it is time for me to apologize.
You see, I was born into a family of Jehovah’s Witnesses. I was a member of this organization for nearly 21 years. I got baptized when I was 14 and left Jehovah’s Witnesses on December 16th, 2003.

She refused the proper medical treatment on religious grounds until it was too late and she died. Was her death inevitable or could it have been avoided?
Years earlier, Watchtower had subjected Dankwa to a religious tribunal, known among Witnesses as a “judicial committee,” because she had accepted a blood transfusion when giving birth to her previous child.

The defendants claimed that because Stewart was now dead, A had brought her claim too late and they were not responsible, although they accepted he did sexually abuse her [from the age of four].

London’s High Court has ruled that Jehovah’s Witnesses failed to take “safeguarding steps” to protect a young woman from abuse by a Ministerial Servant. The victim has won a six-figure payout, according to a BBC report.

Cedars writes about this video in an article you can find here.

And he’ll probably be treated as a hero.

It is a simple question – but it illustrates the cruel simplicity of undue influence at work among Jehovah’s Witnesses: “HAVE you ever thought, ‘Am I the kind of person Jehovah will want to save during the great tribulation and bring into the new world?’”, asks JW.org in the introduction to the Study Article “Give us more faith”. This post will try to explain the scope of manipulation at play here and show the true nature of this seemingly – on the surface – harmless question.

Jehovah’s Witnesses Governing Body member Tony Morris is the host of the January video on the new JW online television network and what he says is a terrifying tirade against higher education.

In their latest propaganda video, the Church shows a little girl choosing between buying ice cream for herself… or donating that money to a church.
There’s only one way this commercial can end:

Another article by Hemant Mehta. A link to the video he is writing about can be found at the link.

Boy, 7, taken away from his parents after judge rules he has been damaged by his Jehovah’s Witness mother’s religious beliefs 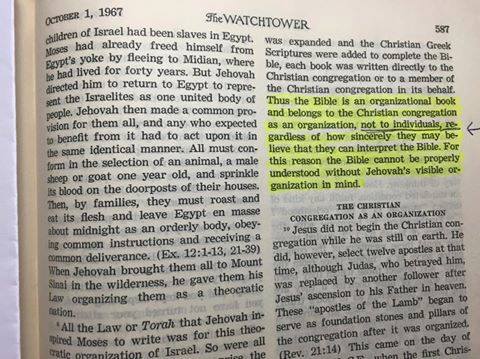 I think most of us are pretty sure the answer is yes. Especially since it’s hard to be an active member of the ex-Witness community without knowing at least few exxers who had similar experiences.

The religion’s parent organization, the Watchtower Bible and Tract Society of New York, issued the directives in at least 10 memos dating back to 1989. Although the memos were anonymously written, Watchtower officials have testified that the organization’s Governing Body approved them all.

Remember the part in bold. The next time a Witness tells you these letters are all apostate fabrications, you can now tell them how mistaken they are. Why would officials admit it in court if it wasn’t true?

A list of documents regarding the ongoing Candace Conti case, the first ex-Witness to successfully sue the Watchtower for its failure to warn other Witnesses about known pedophiles.

Are Jehovah’s Witnesses a Cult?

According to Janja Lalich and Michael Langone, a psychologist and the executive director for ICSA (International Cultic Studies Association at icsahome.com), several characteristics* that may be present to a greater or lesser degree, and which help to distinguish cults from other communities or groups are:

This one comes from AAWA’s website and is written by Richard Kelly.

An older story exposing the problems with Jehovah’s Witnesses and pedophilia, but also from a major news source.