I recently stumbled upon an article at Ezinearticles.com, entitled, “The Argument That Jehovah’s Witnesses Are Not Cult Members.” It was written by Troy Bart Simon, who is listed as a “Basic Level Expert Author.” In case you have any doubt about the exact nature of Troy’s post, the description at Ezinearticles.com begins, “Jehovah’s Witnesses are often looked upon as being part of a cult, when in reality they are far from anything cult-like.” Yeah, I’m sure that won’t rile up any of my readers. Yet Troy probably thinks his statement is completely true. In fact, he’s probably one of Jehovah’s Witnesses himself.

Some at JWD have already responded to Troy’s article since it was written about a year ago. I have a few points worth mentioning, too. Note that this article spans more than one page. So don’t ignore the little numbers at the bottom if you want to read past the first one. They’re below all the “Like this post?” stuff.

Please feel free to make additions, corrections, or other points in the comments below. If I’m convinced you’re suggestions have merit, I might revise this article to include them.

Now here’s my response to “The Argument That Jehovah’s Witnesses Are Not Cult Members.”

I know most you are already troubled by Troy’s opening statement. Here it is again.

“Jehovah’s Witnesses are often looked upon as being part of a cult, when in reality they are far from anything cult-like.“

The eyes of many ex-Witnesses will probably go wide with fury at this one. Or maybe even catch fire as the Wagner1 music starts playing in their heads. Before we get too annoyed with Troy for expressing this opinion, let’s try to remember that a solid definition of religious cults has always been tough to pin down. So he can pretty much use any definition he wants, including ones that favor his argument, even if that means he has to ignore all the definitions that contradict his argument.

When becoming a Jehovah’s Witness, there are no secret stages – the path to membership is clearly stated from the beginning. Preparation includes the studying of a book with many people, which is based on the Bible.

Many Witnesses probably feel that this is basically true. But I have some problems with it.

First, regarding converts like myself, it’s not as if Bible students are handed an outline of all the life changes that go with becoming one of Jehovah’s Witnesses from the start. What they do get is a weekly study that takes them through an entire book over a period of months. And I didn’t study with an audience, so I’m not sure where Troy came up with “studying of a book with many people.”

These books are designed by the Society’s authors to bring new members into the fold in a careful, controlled way. Many of the Society’s teachings can be quite shocking to the unintiated. Bible students are introduced to the teachings gradually, wading ever deeper into the water until they’ve successfully waded in all the way (which leads to baptism, of course). From there, they are committed to the Society’s cause and will be disfellowshipped (shunned) if they ever have a change of heart. There’s simply no getting out with your honor intact.2

To be fair, this slow and steady approach is a necessary part of the process. The average person would be suspicious of a group that believes in shunning, that all world governments are controlled by demons, or that non-members are to be viewed with suspicion because they’re all unwitting pawns of Satan. Not to mention the fact that, in the Society’s eyes, other religions are demon inspired abominations to God. But these ideas don’t seem as shocking if you ease into them, especially if the student has been to meetings and has begun to feel invested in their own conversion. The more invested you are in a group, the less likely it is that you’ll leave.

Secondly, many Witnesses were actually born and raised in “the truth” by their parents. That means more weekly meetings than an AA group, more homework than I ever had in school, and a way of life that is taught to them from birth by their parents. To them, it’s all normal because that’s how they were raised. For them, this is simply how the world works. I doubt most of them recall most of the stages because they were too young.

The second part is true, however. Witnesses do get to live wherever they like! As long as it isn’t Santa’s workshop, of course. But that’s pushing it a little on the realism meter, so score one for Troy. 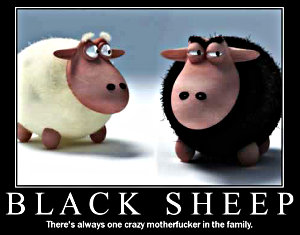 The third part about no “restrictions when it comes to family who are not Jehovah’s Witnesses” is on far shakier ground. All non-Witnesses (worldly people) are deemed bad influences by the Society. In most cases, being a worldly person marks you as a black sheep in Witness families. How each Witness reacts to this may vary, but Witnesses are strongly encouraged to keep worldly people at arms length–even if they’re family. In fact, many non-believing family members are simply cut off by their own relatives, even if the they were never officially disfellowshipped by their local congregation. So while the Society doesn’t exactly forbid Witnesses to completely avoid non-Witness family members, it certainly discourages them from having much contact. Unless it’s to convert them, that is.

If the non-Witness is disfellowshipped by the congregation elders, then it’s all over for them. In most cases, you’re own mom wouldn’t speak to you if you were disfellowshipped. Not only would she be in violation of God’s law (as taught by the Society at least) but she would be at risk of being disfellowshipped herself.

In other words, there are restrictions for Jehovah’s Witnesses when it comes to family members who do not believe in the Watchtower Society. But those restrictions can be a little vague depending on the circumstances. Troy’s statement about this was quite specific and made it sound as if there were no restrictions whatsoever. To me, that’s very misleading.

This is a very subjective statement. I suspect that many non-Witnesses would not agree with Troy here. I certainly do not.

To be one of Jehovah’s Witnesses means that the Watchtower Society looms very large in your world view. Your life is dominated by meetings, door to door ministering, a never-ending reading list of books and magazines that the Society prescribes, and avoiding close relationships with non-Witnesses–even if they’re your neighbors or your own family. Witnesses are even told what forms of entertainment is permissible and to avoid anything that contradicts the Society’s teachings. Ultimately, Witnesses are expected to put the Society first in all matters–even their very lives as it applies to blood transfusions–and are often badgered to do more in its service.

I could go on. I leave it to you to decide if this is a balanced way of life or not. I suspect different answers from different people. My answer is no.

There is no consulting of elders before making decisions, and Jehovah’s Witnesses are pushed to maintain strong relationships with God.

I can’t disagree with this one. Good job, Troy! You get a star.

When it comes to a spouse who may not be part of the religion, there is no pressure to leave them. It is actually encouraged to stay with them to maintain a healthy, strong marriage.

Actually, the Society strongly discourages Witnesses from marrying worldly people. Many Witnesses do leave spouses who stop believing in the Society or the Faithful and Discrete Slave. Especially if their worldly spouse changes religions. This is, after all, an act of apostasy in the eyes of the Watchtower Society. Message boards like JWD and JWR are littered with former Witnesses who are now single because they had a change of heart about the Society’s teachings. Others simply pretend they’re still Witnesses so their spouses and children won’t leave them. So no, I wouldn’t say that there’s no pressure to leave an unbelieving spouse.

To be fair, worldly spouses don’t always help the matter. Some nag their significant other about the Society. (Speaking against the Society is also an act of apostasy, by the way.) Yet the opposite also happens: some Witnesses don’t know when to stop converting their non-believing marriage partners, either. Basically, unless both people in the relationship are willing to call a truce, this can drive a wedge in many relationships. I seem to be one of lucky ones. Many are not so lucky.

Basically, Troy’s statement about marriage restrictions seems very misleading. If I was Troy’s editor, I would have advised him to rephrase it for accuracy or leave it out to avoid confusion. No star for you, Troy.

There is no expectation that Jehovah’s Witnesses should become completely devout to the Witness Bible, and the education process works on many different levels.

I’m not clear what Troy is talking about here. I think he means that Witnesses aren’t forced to throw out their old King James, or other versions of the Bible, in favor of the Society’s New World Translation. Which is true. Note that the Society likes to point out the flaws in other translations while hailing their own NWT as the best, so Witnesses are certainly encouraged to take the NWT more seriously than other translations. Jehovah’s Witnesses always use the Society’s literature to help them interpret the Bible in any case, so it hardly matters which Bible they use. I’m not sure why Troy thinks this will impress anyone.

What does “the education process works on many different levels” mean? And why is it important? Perhaps he’s referring to the way Bible studies are conducted, but I don’t see how this helps his argument. Maybe he thinks this makes it sound like Jehovah’s Witnesses are well trained and well informed? I wish Troy had explained this one a little more. If he cares to post a comment about it, I’d be glad to read it.