There are no restrictions when it comes to medical, dental and / or psychological services. The only restriction pertains to non-blood medicine, meaning blood transfusions.

I was getting worried there when I read the first sentence because it isn’t true. Troy saves it when he contradicts himself in the second sentence. That’s where he admits there really are some restrictions, thus refuting his first statement. Why would he even bring it up if he’s just going to admit it isn’t true in his next thought?

Am I the only one to notice that the Society’s authors do the same thing in their writing? They say one thing, then contradict it somewhere else in the same paragraph. I sometimes wonder if this is a deliberate attempt to muddy their own writing. If you read Troy’s sentence, you’ll notice that the contradiction doesn’t leap out at you unless you’re really paying attention.

Or maybe Troy thinks that life saving blood transfusions aren’t important enough to count as a medial restriction, so he just mentions it as an afterthought. If that’s the case, then I don’t think Troy has really thought this one through.

Regarding “psychological services,” the Society has urged Witnesses to use caution when visiting worldly psychologists in it’s literature, but that isn’t exactly a restriction.

There is no controlling behavior when it comes to Jehovah’s Witnesses and you are taught to train yourself to decide what is right and what is wrong. Many Jehovah’s Witnesses are civil workers in the government, such as principals, teachers, lawyers, nurses, and doctors.

Let’s look a little deeper at what I mean by controlling behavior. Then you can decide for yourself who’s right.

I could keep going. You make up your own mind about how controlling the Society is.

The whole structure of Jehovah’s Witnesses is not tied down a specific way, therefore it is able to adapt to society that is constantly changing.

Here’s another one that’s pretty vague. Perhaps Troy is comparing the Watchtower Society to other, even more insulated groups, like the Amish? There are other sectarian groups who live on private compounds as well. If that’s what he means, then I guess I can agree with that. I’m just not impressed by it. Why does this matter?

Every Jehovah’s Witness has a voice, and can suggest ideas to the main leaders. These ideas are read and a large majority of the time taken seriously and acted on.

This is partially true. Jehovah’s Witnesses can write to the Society to express concerns, ideas, or ask questions. In every instance I know of, these letters ended up at whatever branch office was nearest to the Witness. I have no idea if they ever reach someone on the Governing Body and have never heard of such a letter effecting a change in policy. Not even once. This doesn’t inspire confidence in the open mindedness of the Society’s leadership, but since I don’t know what really happens behind the scenes, I can only speculate about the exact process.

Witnesses can also be disfellowshipped if the content of a letter displeases the Society. At least one Witness who wrote to the Society about the Creation Book’s many problems was eventually disfellowshipped by his local elders. Copies of Mario Di Maggio’s letters used to be available online, but now, you can only find them on online archives. He’s not the only one with a story like that (feel free to write about yours in the comments sections if you like.) At any rate, I leave it to you to decide just how far the voice of the average Witness really goes.

Jehovah’s Witnesses hold no financial obligation to their local or central organizations, and any contribution is given anonymously and voluntarily.

It’s true that Kingdom Halls don’t believe in tithing, or even in collection plates. Witnesses are often reminded to make contributions to the Society, but we can forgive the Society for that. Even God’s organization runs on money, does it not?

Still, Troy’s statement isn’t exactly on the money. (Please don’t hit me!) He makes it sound as if the Society isn’t concerned about money, or makes no attempt to encourage contributions from members, unlike all those other money grubbing religious groups. He doesn’t mention that Jehovah’s Witnesses are encouraged to leave their assets to the Society after their death, or that Witnesses are expected to contribute for they literature they have placed when the recipient doesn’t want to make a donation.

Let’s not forget that the Society does have a pretty sweet deal going in terms of money. It creates a demand for its literature with its followers, who need that shiny new book or magazine for their door to door work and for the meetings. It also nags them to donate for these materials, and encourages them to donate something extra for other Witnesses who may not be able to pay. In fact, the guy at the literature counter at my old Kingdom Hall used to hassle me about my literature if they hadn’t seen me at the donation box that very day. Note that the donation boxes at most Kingdom Halls are right by the literature counter and you have to pass by them on your way out the door.

In other words, Troy’s statement is technically true, but a little misleading in my opinion. The Society isn’t quite as pure and noble about money as Troy makes it sound. Still, to be fair, it isn’t as bad some organizations. I’ll call Troy’s statement a slight exaggeration and leave it at that.

There are no personal [monetary] benefits when it comes to being a higher up in the Jehovah’s Witnesses.

Organization leaders do control a lot of money, and some within the organization do, in fact, get paid for their services. Still, I have no idea if any of them are getting rich because of this. So I can neither confirm nor deny this claim.

There is no great leader, no modern day prophets, and no one person calling the shots. 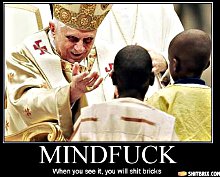 Perhaps Troy thinks that cults are always run by a single, charismatic individual. That ain’t true. The Faithful and Discrete Slave Class remains the Society’s great leaders, as manifested by the Governing Body, of course. The Body claims to have some poorly defined channel to Jesus who somehow helps them reach their decisions. This channel is imprecise enough to allow them to make mistakes and change those decisions (a point many critics often cite) without damaging their claim to divinely delegated authority. Yet this channel is still good enough that the Body can ask Jehovah’s Witnesses to do whatever they’re told and believe whatever they’re taught without challenge anyway.

So while there’s no one person calling the shots, there is a single group that does so with absolute impunity. Remember, lack of faith in the Governing Body can get you charged with apostasy.

Whether he intends to mislead us or not, I think Troy is misrepresenting the situation here.

Everything relies on God and that he calls the shots. There is no one telling Jehovah’s Witnesses that they have to believe and accept everything that is being taught to them.

Regarding the first statement, all religions claim that their god is calling the shots. So big deal. It’s never really true, but they all say it. The reality is that their human leaders are calling the shots, and those leaders are the ones interpreting their god’s will. As an atheist, it’s easy for me to notice that gods tend to have very poor communication skills. People are always interpreting their wishes in different ways, even if its within the same religion or organization. Christianity’s 1500+ denominations are a prime example of this.

But the real sticking point here is Troy’s second statement about having to believe and accept everything the Society teaches. The Society’s leaders are, in fact, telling them that they have to believe and accept everything that is being taught to them unless they want to die horribly at Armageddon or be disfellowshipped. Does Troy really need me to start quoting the Society’s own literature for him? In my opinion, he’s way out of line with this one. Troy, you’re a very bad boy.